It is the middle of the term and hence very busy around here--my class has four written assignments in a row and of course that means I have to grade them all.  It's all good though--it is an honors class and they are very very chatty.

I have been working a lot on Koi Pond: 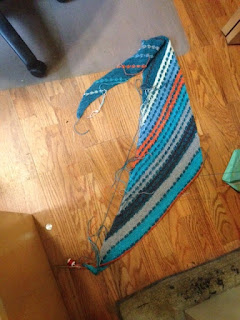 And it looks good (imho). I have a few wide stripes left and then a 100 row border. I'm getting a bit worried about having enough yarn though.

I finished "Barkskins" and then I read a nonfiction book called "Astoria" which is about the founding of Astoria, Oregon. It is fascinating---I have visited Astoria and knew it was somehow related to the Astor family but had no idea that it was the second major exploration of the Columbia River after Lewis and Clark. I really liked it a lot, even though it was very difficult to read (lots of conflicts between easterners and native americans, most of them very bloody) and the author (Peter Stark) paints a vivid picture of how dreadful both the overland and the sea voyages were.

Other than this--there's a conference deadline next week and I'm working on two papers that are pretty much done, I have to finish a few proposals (one book, one program) and need to start thinking about next term (yikes!).

Love your shawl it itruly is pond like and Koi colored. GORGEOUS