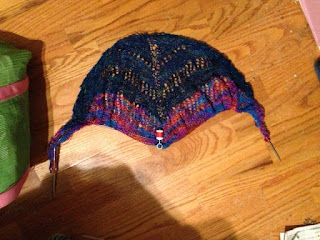 It's Reyna, which I started earlier this week (maybe last weekend). The yarn is a beaded silk. I did the first 'half' with blue and green variegated, and then I switched to a multicolor variegated, and then I'll do a bit of the darker color at the end. This is one of those shawls that needs a good blocking. I'll have plenty left over, plus I have another skein in very brights, so I'll put them all together into a scarf with mesh stuff so the beads look good.

Wednesday was a nutty day--my first day back with nonstop catchups and student issues, and then yesterday I gave myself a writing day. I have a book project that I have been stalling on getting going--it is a major revision of someone else's book that was written in the late 1990s, so lots has changed in the communication industry. My co-author is an ad person who lives in Scotland, so that adds to some of the challenges. Anyway--I got it all organized yesterday, got a revision plan together, and worked on the first part of the book and have a first pass to send to him to discuss. So I feel at least that I did something on it. The book isn't due til August but this term (through March) is my optimal term to get stuff done on it.

I had some bad news about one of my former PhD students and I'm hoping doesn't mean that 2017 is starting off where 2016 ended.

I'm so sorry about your student. They don't ever leave you, really, huh? I hope you're okay.