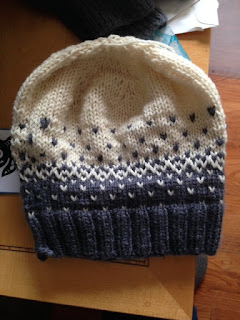 So I'm technically kind of cheating on this one. This is the Manning Park Hat (pattern from Ravelry) and most of the knitting was done yesterday (New Year's Eve) but I haven't woven in the top end of sewed the little tiny seem in the ribbing. So let's just say that this is the first FO of 2017!

I think I skipped a row on this but I'm not sure. Matters little. The dark yarn, which looks blue in this photo, is actually a dark grey (the ribbing and the bottom are the same yarn). I used two different yarns (one was Wool People, the other might have been Cascade) but both were worsted. And it took about six hours to do the whole thing, so it is a very satisfying knit. I'm sure I will make another one.

It is now about 3pm on New Year's Day and we've had a busy couple of days. Yesterday Tim spent much of the day cooking our New Year's Eve Mexican-esque Feast, which included tuna ceviche, mexican meat balls, and a green chile/pork stew. Yum! We also had leftover chocolate mousse that Tim makes for Christmas. And cookies, of course. We watched two movies for our festivities. First, we watched a movie called  "The Man Who Knew Infinity" which is the story of a mathematical prodigy from India, Srinivasa Ramanujan, who went to Oxford in the 1910s to be mentored by Professor Harold Hardy. Tim had heard of him but I hadn't. The story is fascinating, the movie is a bit--sentimental maybe? A bit heavy handed on foreshadowing? But if you get DVDs from Netflix, put this one your list. The second one was called "Equity" which starred Anna Gunn (Schuyler from Breaking Bad). It was a pretty typical Wall Street Insider Trading story. It was OK, but as our second movie during a late night it was fine--plenty of intrigue and a shallow plot that made it easy to follow. Plus, I made the hat. We were actually not even tired and had plenty of energy to comfort Pilot during the inevitable fireworks.

Today we got up fairly early for New Year's Day, had a leisurely breakfast, took down the tree and put all the decorations away, went to Michael's for memory wire, and then chopped down a mugo pine that fell down during the storm. Tim clipped all the branches off both the Christmas tree and the mugo--I made a pile of mugo branches to take to the alpacas, and stuffed the rest of the branches in the yard recycling toter. Now we're tired. :-)

Hope your New Year's is going well and that you have a FO of your own soon!

Love love love the hat KIM!!! My decroations are down too. I was too sad to look at the tree with the kids gone....Im enjoying knitting with Christmas yarn! Let's work on the kitty sock KAL for Feb? Sound ok?