Don't it always seem to go--

--that everything gets finished at the same time?

I finished the Someday Hat (sometimes hat? I really can't recall) and it looks great: 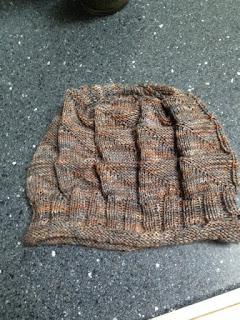 I didn't do as many repeats of the 'triangle' pattern as the pattern suggested--it called for seven and I stopped after four. It is still slouchy so that works fine. Too much slouch is just not that cute (in my opinion) (when you're not 21).

I also finished the light green sweater during the super bowl--I did the collar which took a long time and then wove in ends. It needs another block (I just steam-blocked it to sew it) and then it will be ready too.

I had another non-stop day yesterday--started work at 7:15am and stopped at 6pm, but in addition to my class I got a bunch of coding done on a social media project I'm working on with a colleague in Texas. And had three or four crises in between. Today I don't have to go in---I am going to finish an article and work on a couple other tasks and get ready for another crazy day tomorrow (non stop meetings and grading). But at least I feel I'm in a more control place, especially since I got that coding done. We are looking at how NFL teams talk about their participation in Breast Cancer Awareness Month on social media--and there are some interesting patterns.

Tim finished his comps--hooray---so proud of him. He defends a week from today.

Gosh you are in a whirlwind. So glad you knitting gets some time too. That hat is awesome sauce!!!

I'm interested in your project about NFL teams and Breast Cancer Awareness. Will the results be published somewhere? On social media? :)

We should have a draft in about six months--remind me and I'll send it to you.