Man, this term has been particularly crazy. I thought the search committees were done but no, the people we want have made (perfectly reasonable) requests as part of their hiring package and I have to do stuff to get that done. It is tenure and promotion season and I stepped in to be chair of THAT committee (just for six months, how busy could it be?) and now that is hitting the fan as well. Plus we just finished admitting PhD and Master students, and I'm on THAT committee.

Today I need to edit three tenure reports, write a letter of rec, finish a draft of a syllabus and THEN I can do the research stuff I had planned for this week. Hopefully things will calm down next week (but that is what I thought this week, so who knows. I guess I just need to call this 'research term' a loss).

I did get three out of four presentations put together for a conference so I'm not quite as panicked as I might be, and I'm caught up with grading, and if I would just stop pfaffing (is that a word? yep googled it is) around on the Internet I'd have more time. 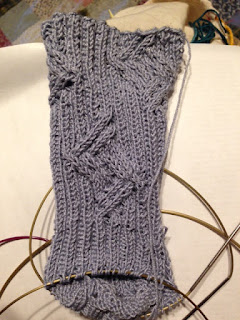 I forgot I still needed to do a second titled block sock, and found it while cleaning up the yarn room. So I got the leg done and now is the foot, which is basically mindless knitting that I can finish in an afternoon. Yay socks!

I Love your socks. Love love love them . A solid in that pattern is just amazing!