We had fun all day on Saturday. We have both been working so much that I sometimes worry we forget to have fun.  Yesterday was a series of small pleasures that added up to a great day.

We slept late (for us) (8am), had a leisurely breakfast, and decided to take advantage of a beautiful if chilly day. We ate leftover pizza, then put the dogs in the car and went to Morse Ranch, a working Filbert farm right on the river. We took a long walk, and on the way back to the car, a really cute dog came running up to up, trailing his leash. He was calm enough for me to get his leash and then give Pilot to Tim to walk, and we continued walking back to the parking lot, the dog a fine companion. We were both pretty sure the dog wasn't abandoned (as unfortunately some are) and that someone was looking for him. About ten minutes or so after we started walking, the dog starting pulling on me--not that he wanted to escape, but just that his walk became purposeful. And then a man turned the corner, looked at us and smiled, and the dog was thrilled--he found his dad.

Apparently the dog (Neo) has yet to be fixed (that's happening this week) and apparently another dog that lived near the park was in heat, and that makes Neo go crazy. TMI, yes, but it is good to have an explanation, other than the guy lets Neo run wild in the park whenever he wants.

We hung out a bit on Saturday afternoon. I"m reading "The Fortunate Ones", and it is pretty good. It is one of those books that bounced between 'the present' and 'the past'--the past in this case being before and after WW2.  Basically, there's an Austrian woman in the WW2 whose family owned a painting called "The Bellhop" which apparently is a real painting. The painting gets stolen by Nazis. In present day, a different woman's family owned the painting, until it was stolen from their home. It was stolen when the  modern day woman was a teenager and had a party. And somehow, the two women (the Austrian woman, who is now elderly) and the modern woman meet, and that's where I am right now. I'm guessing that they will try to find the painting. Anyway--it is pretty good. And I like those 'back and forth' stories.

Then last night, we met our friends Steve and Jen at a new restaurant called "Novo Latin Table" and it was delicious. We had a bunch of appetizers including a delicious scallop cerviche.  The entrees were not too huge which was good because we ate a lot of other stuff first, and then ended with a delicious chocolate pudding with mole. And drinks. It was a lot of fun--the restaurant was lively but not loud, and it was just fun to be out. 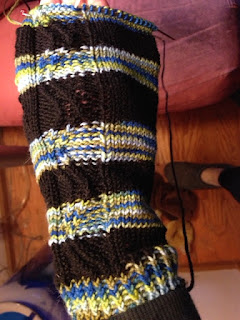 And here's one of the current socks,  Zigzagular, taken under a bright light so you can see the zigzag on the black yarn (although it is still kind of a challenge).

I hope you have a great Sunday!

My hero !~ You saved that little dog! I loved hearing about your day with Tim. Did you mean you had pizza for breakfast? I LOVE THAT. I can eat cold pizza anytime! Your fun dinner with friends sounds leisurely and well deserved. I LOVE YOUR SOCKS lady!