I can tell I haven't been 100% for a few days since the only things I have wanted to knit are very straightforward (ie no cables) (or lace) (or anything that involves complex thoughts). As a result, look what are done: 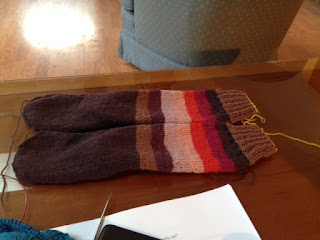 I even did a load of socks this morning so they're ready for wearing (and I did snip off the long ends).

These look good--as a reminder, these are the 'pairfect' socks from Regia. This yarn is one-ball that has a long lead yarn (the yellow---see it at the top of the cuff) that shows you where to start so the two socks are exactly equal. This is genius. Here is a warning, though: this is a center pull ball and by the time you get to the second sock, to quote Yeats, "the center cannot hold". So I would advise you to wind this into a ball from the get go, or know you'll have to wind this into a ball to do the second sock.

In retrospect, though, I could have knit this from the outside in and done a toe-up, which I might try on the next socks I do from this yarn.

I also cast on for a summer top--the Drop Shoulder Tee--that Kathy just finished. I'm going to use up stash and do a 'color block' version in Rowan Calmer. It is pretty basic to knit and I can knit and read while doing it.

I finished a book called "The Hollywood Daughter" which is a novel about a girl (teen-aged) who grows up in Hollywood during the Hollywood Blacklist period. The main character is a huge fan of Ingrid Bergman, who was of course 'exiled' from Hollywood for a while due to her affair with Roberto Rossellini. It was pretty good--it did a fine job of recalling that period in film history.

I'm about to finish "The Animators"--remember when I said I needed something with a bit more depth. Well, this one is giving it to me. It is about two young women who meet in art school who create animated films that address the challenges they faced growing up, and how those challenges they faced as children manifest in their current lives. And the challenges are not of the "I didn't get invited to a slumber party" kind of challenges--these are tough situations these kids dealt with. It is an interesting way to consider the role of art and creativity in our lives, but this novel is raw. It isn't going to be for everyone. (For whatever reason, I thought it was going to be about the struggles of women in the 1950s working for Disney. I guess that is a different book. Or I made that up).

Last night we watched "Manchester by the Sea" and so I guess that made yesterday a day of rawness and grief and sadness, entertainment wise. MbtS, as you know, was nominated for a bunch of awards and won best screenplay and best actor. It has a great cast including (I just learned) Baryshnikov's daughter Anna.

We visited the Home Show yesterday to start to get ideas for the new house. And had a lovely walk and lunch out. A busy day, all in all.

I always ball my yarn. Bailey at my lys laughs about this. But i dont want any surprises as i am mid project. Im so happy you want to knit the tee i knit. Now we await a snowstorm so the tee is in waiting!