I love the idea of the Zigzagular socks, but the actual execution wasn't the best. 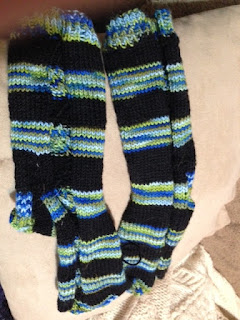 First, the yarn wasn't a great pick--you can't see the zigzags in the black yarn.
Second, the actual zigzag part serves as sort of a giant 'rib' in the sock, which works OK but is a bit wonky.

Oh well. As soon as I finish this post I"m going to go look at what I want to knit next. I know some things have whispered 'knit me next' but not sure exactly what I'll start. You'll be one of the first to know!

Today I'm working at home and am tying up lots of loose ends. We have a good version of the grant proposal (it is due in a week) and now I think it is just tweaks, so check that one off the list. The four presentations for the Boston conference are done (the biggest one--a paper I authored on the connection between curiosity and creativity) needs one more look-see but then that is done. I finished  my personnel committee reports, the 'official' proposal for a new Master's program that now goes on to Higher Ups at the University for review, I finished a break-even analysis for said program, and I finished my annual report (which is oddly due in the dead center of the academic year). These were all things that were in a 'mostly done' phase and it is now nice to have them be completely done.

So the only big outstanding thing is the paper that is due April 1, and I'm targetting Thursday and Friday mornings for work on that. So that's a good thing.

Today is incredibly rainy--got the dogs around the block but that may be it for today. They're fine with that.

OH and I put a pot of chili in the slow cooker, so dinner is covered too. I make myself tired sometimes, but I do love a focused day at home.

I love that: i make myself tired sometimes. ! Sometimes I do that too. Sounds like all your ducks are in a row Kim for work. That's a great feeling. We have incredible winds today. Day 3 of insane winds. We are up on a hill now in this house and I think that is why it seems windier than the Windy city itself.