You've all seen what I"m working on, knitting wise, so I thought I'd take a 'snow day' from knitting content and share some other content with you. First, it really is a snow day: 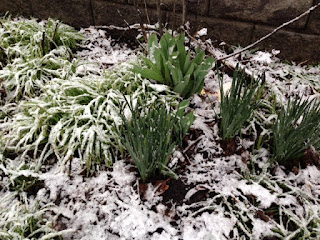 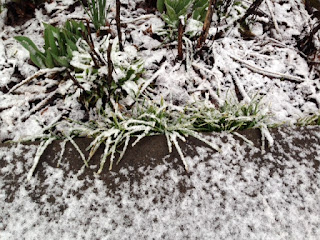 My poor spring bulbs are all covered with snow---daffodils in the top photo and grape hyacinths in the bottom. We just have a bit down here (we're at about 440 feet of elevation) but my friend Nicole lives up in the hills and already has a few inches. It is not the latest we've had snow here (one year we had snow during winter term finals week, which is right around St. Patrick's day) and we had a long streak with no snow in January and February so I'm not complaining.

Yesterday it was supposed to rain all day but as we were sitting around in our PJs after breakfast we noticed the sun was out and there was blue sky, so we threw on clothes and took the dogs for a long walk (about 3 miles) up in the hills near our house. Luckily the weather held for our walk and then turned when we got home, so yay for us!

Last night we watched "Girl on a Train" and it was good--I had read the book and thought the ending was different but apparently I was thinking of a different book with an unreliable narrator.

I've read a few books lately--nothing that good, a mix of chick lit and mystery/thriller.

1. "On Turpentine Lane" by Elinor Lipman--Lipman is one of my favorite authors of all time, but her last few books have not resonated with me as much as her earlier ones (if you're looking to read some of hers, read "Then She Found Me" or "The Inn at Lake Devine" or "The Way Men Act".  Anyway, this story was about a woman who buys a house where there may or may not have been a murder and there's infidelity and romance and it is all a bit muddled. For Lipman friends only.

2. "The Pretty One" by Lucinda Rosenfeld--this one came up on the Kindle as "what others who read Elinor Lipman also read" and this one was very very Lipman-like, three sisters and they all have a pretty specific identity in their family and those identities get mixed up with Life Happens. Lipman, as a matter of fact, has a similar type of story in her book "The Ladies' Man" which I like more than this book. But this was  a fast and enjoyable read.

3. "You Will Know Me" by Megan Abbott--this was the mystery. There are a lot of moving parts but the basic story is: there's a teenager who is a gymnastics prodigy, and the boyfriend of one of the coaches at the gym is murdered. Whodunnit? I pretty much figured out whodunnit very early on and you probably will too. But it was OK.

These books were all 'knit and read' books--it is easy to read them while knitting. But you could figure that out. I think I need a book with more 'meat' next--I have a biography of the Mitford sisters and I might dive into that next.

Today I also want to think about what to knit next--the Zigzagular socks will probably be done in the next few days as will the mindless stripey socks. I have a pile of patterns and so will be able to dig in on those to figure out what is next.

Ick. Snow snow snow I'm done with you. Your bulbs will be fine. THey are hardy! I love Elanor LIpman. Inn at Lake Divine!!!! I too am unsure what i'm casting on next....Im torn: Hat or socks again.