I finished much of the knitting, including the neckline, and gave this pretty a bath yesterday: 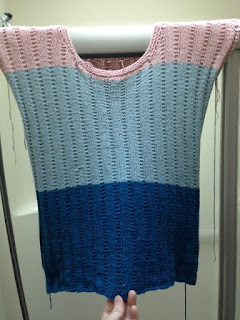 It is still a bit damp.

I need to sew the side seams and do a finish on the armholes, but this one is close. It looks really cute and I may just knit another one.

Today, though, I need to cast on for more stuff.

In other news: I finished "The Birthday Party" (it was good) and am now reading---"The Widow of Wall Street" (I think) about a woman who is married to a  Bernie Madoff type person. So far it is good.

Thursday was the symphony, and it was "The Damnation of Faust". We know nothing about opera, although according to Wikipedia this is a  mix of Opera and Cantata. Anyway--it was not 'performed' in the sense of costumes and scenery and choreography--it was people standing in the front of the stage and singing the parts. This performance for some reason included projections on the sides of the theatre of things like clouds and church windows and stuff that sort of illustrated the work but was just kind of distracting. Although it did make it clear when Faust and the Devil landed in hell.

It was a bit odd, but pleasant in a 'what will happen next in the story?' kind of way (the symphony translates the words--french in this case--on a screen high above the stage).

We think the guy playing the devil might have been drunk, or stoned. Or just chewing the scenery.

And of course, I'm so uncultured that whenever the work referred to the Devil as Méphistophélès, I immediately went to this place:

I would have gone right to the CATS thoughts too! Love your top. I ll show it to doreen at the knit shop. Its her pattern. Do you put it on yourRavelry project page? That helps her I think