Apparently, April showers bring April flowers! The garden is in a beautiful bloom--usually things go in 'phases' (first the grape hyacinths, then the daffodils, then the tulips) but this year everything is blooming together: 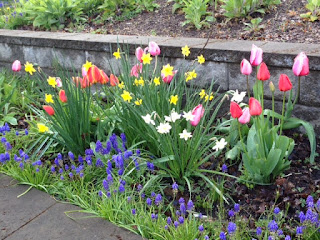 And whether anything will be blooming at Easter is always an unknown, but apparently this Easter will be flower filled. The tulips in the 'upper garden' are ready to bloom, and if the expected sunshine does appear there will be a beautiful display close to the house. I usually don't cut tulips to decorate inside but dare I say, we have enough this year that cutting a few stems might not make a huge difference: 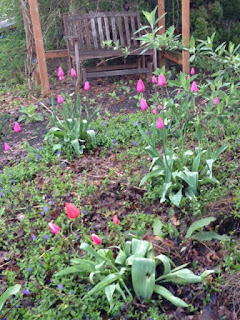 We both love Bleeding Hearts: they are native to Oregon and we like to have as many natives as possible in the garden. We had a few straggly years of them but now they appear to have naturalized nicely: 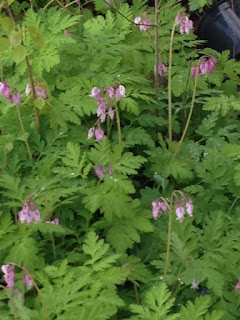 The only thing missing this year is the Columbine, which apparently have chosen not to reappear this year. I only see a few lonely flowers peeping up. I need to remember to plant some in the fall.

And in the 'my knitting is boring' category: 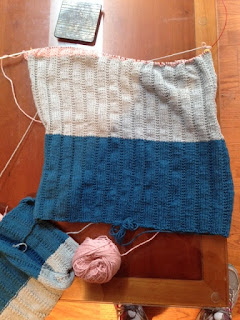 I've moved on to the neckline. This might be done this weekend. I need to find something new to cast on for.

There's an interesting light and shadow interplay happening in that photo.

I'm finishing a book called "The Birthday Party" by Barbara Vine (which is one of Ruth Rendell's pseudonyms). It is good, as many of her books are. Baroness Rendell died in 2015 but had a hugely prolific writing career, and I've barely scratched the surface. Do you have a favorite Rendell/Vine book? I want to start the Inspector Wexford books from the start.

Tulips are so lovely; lucky you. I'm in the mood for irises, but have no idea about planting times or any of the most basic gardening things.