I spent some time working on the Dolphin Cowl yesterday--I started this project with less yarn (by weight) than recommended, so I've been measuring the remaining yarn as I've worked through this to make sure I don't get stuck without yarn. This is kind of important for this cowl since I am doing picot edges which take a lot of yarn.

This is fun to knit--it is a mix of cable and lace. 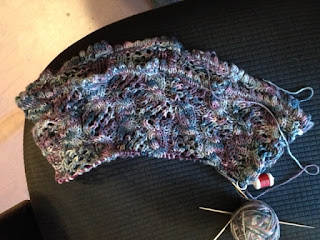 This is the magic of this cowl: the cable is very simple (just one six stitch cross--you put three stitches on a cable needle--I use a double point--knit three in the back and then knit three from the cable) and the lace is easy lace (depending on the row, it is either three sets of k2tog yo or two sets of the same one, bordered by a knit stitch) but you  put it all together and it looks really cool: 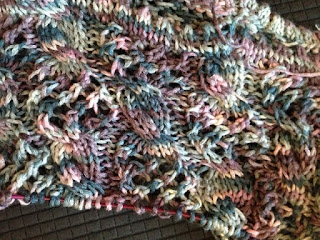 It will look even better when it is locked--it does indeed look like dolphins (a little bit).

The yarn is a mix of greys and pinks which is lovely, the yarn is cotton and something which is nice and light but will block out really well, and it is a relaxing pattern (as there is a lot of stockinette in between the lace and the cable).

I like this cowl. Not as much as One and Done but one cannot only knit one pattern forever. Can one?