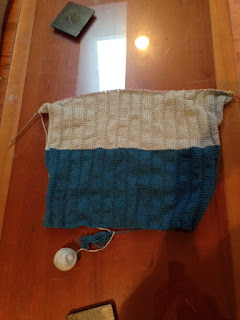 Not good light this morning (again) as it is cloudy and drizzly (again). But I'm almost done with the light blue and then comes the little bit of pink at the top and then this is almost done! It has seemed to take a while but i've really enjoyed knitting it--it is not quite mindless but sort of mindless.

I have more Calmer in a tan color that I might use for a second one.

Other than that, just regular busy life. I've had two dissertations to read and comment on this week. This actually works out well as starting next week I will have grading to do every week, and that is the priority. Spring term is just out of control some times.

Other than that---let's see. We watched a new series on AMC called "The Son" but I don't think we'll keep watching it--various reasons but it is pretty violent and upsetting and that's a big part of it.

I feel boring, but there you have it.

Im loving your top. I cant wait to show it to my LYS shop owner who designed it!! You are not boring. I dont like violence, vulgarity or upsetting. The true news is upsetting enough! Hugs