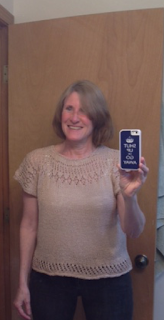 I ended up picking up (maybe) too few stitches to do the neckline but I think it still works out. This has such nice drape--it is that linen yarn from Knit Picks. I probably only used about four balls so it is a relatively affordable knit. The yarn is Lindy chain which is $4.49 a ball---but watch for it to go on sale, as it does every so often. Anyway, I like this a lot--I'm wearing a cami underneath it because it is kind of sheer, but I do like it.

And I need to find something new to cast on. I'm thinking about Spider Socks for Tim---I'll be off to check what is in the stash that might work (pretty sure there will be something there).

In other news:
Hope all is well in your neck of the woods!