It's the first day of June--and (perhaps unsurprisingly) it is drizzly and grey here (although quite warm--just got back from my 2 mile walk with the dogs, it is not even 8am, and it almost 60 degrees here).

Yesterday was a ten hour day, with nonstop meetings starting at about 10:30. It all went well and had some good news about approval a program that we've proposed (although the approval itself was a cluster) and there's only one more week of school before finals week and summer, so I feel like I can deal with it all. Had a whiney snowflake who doesn't listen and I'm on his Honors committee, but we got his defense scheduled for next Thursday and then I'll be done with the biggest problem I have. 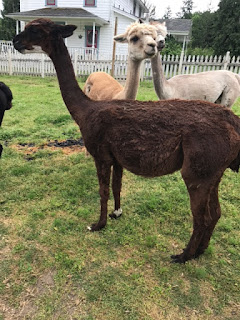 A pretty pregnant Tinkerbell. She is due sometime in August and she has quite the 'TinkerBelly" as Ann called it. It is somewhat more pronounced because she was sheared a onth or so ago. So far so good with Tink!

Oh this is so exciting. I must have many many Tink updates. I know it will go well this year. IT has too!!