Our weather in the PNW is always a bit--well--different from the rest of the US. For example, most of the US is experiencing something called 'summer' that is characterized by clear skies, warm temperatures, and opportunities for outside activities.

Here is the back yard last night: 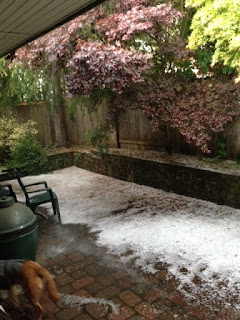 For the past few days it has been grey and rainy and cool---barely above 60. Yesterday evening, in between the rain showers, we had a huge hail storm--it went on so long and was so loud we had to pause the movie we were watching til it passed. There was thunder and lightning as well.

And so that makes this knit fairly appropriate: 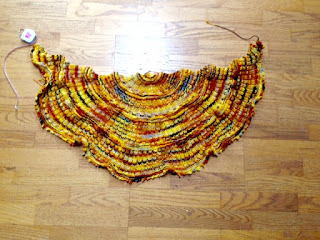 I finished the drop stitch shawl and am about to block it (although I guess I'll block it inside as opposed to outside). Right now it is 15" in depth but I'm hoping it blocks out a lot bigger. 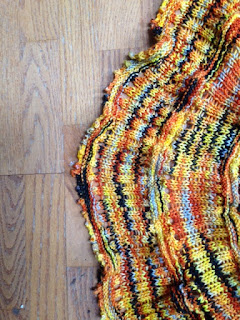 The edging was not fun. I think I spent about seven hours binding off with the beads. IT do like a picot bind off though. It is just time consuming.

Anyway, on to other projects now!

I really like to knit a picot edge, and to look at one, but it is a bear to block. And I dislike blocking enough already.