We have had a bit of a mini-heat wave this weekend--yesterday it got up to almost 100, today it 91 and I think that is as hot as it will get. Before you feel too bad for us--the humidity is really low (maybe 30%) so it is quite nice in the shade. But we have adjusted our lives accordingly.

Yesterday we took the dogs for a long walk--probably about 3 1/2 miles--as soon as we got up and were home by about 8:30. We could already feel the heat starting to intense. We had breakfast on the patio (first time this summer!) and then worked in the yard til about 10 or 10:30. We did go out for brunch later and then hunkered down. It cooled off enough to open the windows last night, and sleeping was actually nice.

Today we got up and had breakfast and then loaded up the kayaks for a paddle around a reservoir about 20 minutes outside of town. We got to the reservoir by 9:30, but there were already quite a few boats out (we park 'outside' the county park around the reservoir so we don't have to pay the $6 parking--as do most people who paddle there regularly). We got there in prime bird viewing time--we saw a bald eagle, several herons, a whole flock of red wing black birds, a hawk, and random other birds. There was no wind (another reason to head out early) so it was actually a perfect paddling day (although the temps did rise ten degrees during the 90 minutes we were out). We grabbed lunch on the way home and now we're hanging out til we meet some friends for dinner.

OH there's knitting! I posted this and forgot. Doh! Anyway:

This is a mindless sock in one of the Pairfect colors-- 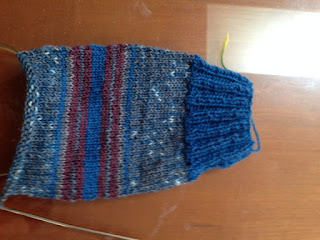 And this is the start of a 'cake' shawl (every 'layer' is a different pattern) and I'd share the name of the pattern but it is riddled with errors so I won't. 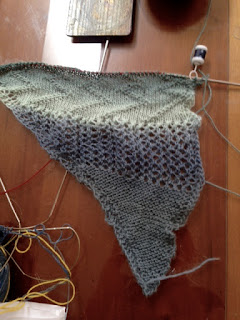 I finished "The Unconquered" and while I enjoyed it, I wouldn't recommend it to a lot of people. Actually, if Rachel is reading this (HI RACHEL!) she might like it, but she might not.

I read an academic cozy (mystery) called "The Semester of our  Discontent" by Cynthia Kuhn. I like cozies, but I get weary of the cupcake/vintage clothing/yarn store ones---this one is cute and captures academic life rather well. Plus I had no idea who the murderer was. Then I read a very cute and fast little story told in texts and emails--"Read Bottom Up" which I zipped through in about an hour. Very fast and cute.

In other news: our neighborhood has a Facebook page. In any given day, the posts are about lost dogs, stuff someone wants to get rid of, and sketchy people in the neighborhood. All kind of useful, but occasionally things go off the rails (don't get me started on the awful posts about the guy who used to feed the wild turkeys). It was most helpful when the power and cable went out during the ice storms: people shared updates they received from the electric company and Comcast, and also there was a DVD swap/share going on for people (as we all got elec back long before cable).

Well, yesterday morning was a flurry of posts about people getting their cars broke into on the street behind ours. People had purses, wallets, earphones, all kinds of things stolen out of cars. But as the posts got a bit more detailed, it turned out NONE OF THESE PEOPLE LOCKED THEIR CARS. I'm astounded. Who doesn't lock their car? Granted, sometimes you forget, but an ENTIRE STREET DOES NOT FORGET! Now don't get me wrong, I'm sorry their stuff got jacked, but honestly. Who is really to blame here? Anyway---there are calls to shut down the Motel 6 about half a mile from the neighborhood (BECAUSE THAT IS WHERE THEY STAY!) and other nutty ideas.

Some of my neighbors--they're nuts.