I almost never talk about my sweet faced boy Atom, who also lives at Aragon Alpacas. 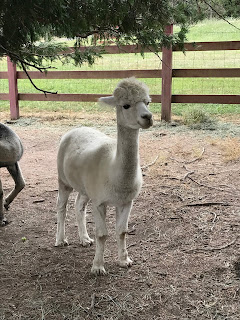 I've owned him for a while. At his previous farm he was not well socialized, and had a bit of an adjustment period at Aragon Alpacas (where he lives now) but now he is a happy part of the boy's pack. I've been at the farm frequently since Calypso was born and he is becoming much more used to me. He is a different breed of alpaca than Calypso and Tink. Atom is a huacaya, and Tink and Calypso are suris. Huacayas are more fluffy (and more common--about 90% of all US alpacas are huacayas). Suris are silkier with locks that grow straight down.

He is gelded (I helped!) and has lovely fiber.

Yesterday was a fun day. Tim and I went to the farm in the morning (it was a cloudy and fairly cool morning) and visited with Ann and Mike. Some families with young boys were visiting and they were adorable! We came home for lunch and hung out for a while, and then met up with friends for a late afternoon hike. There were ten of us--six adults and four kids--and one of the families was visiting from Colorado. We did the hike up to the top of Mt. Pisgah--a good local hike that is fairly short (a mile and a half one way) and really, straight up (there is a 1000 foot elevation gain from the start to the top).

We could see a pretty local forest fire from the top: 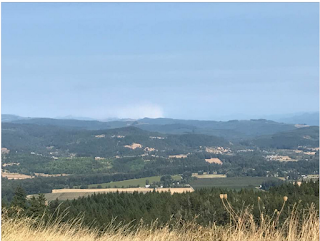 That fire is maybe 30 miles or so from Eugene? Lots of forest fires happening around here.

AND that causes more concerns for what apparently is now being called The Great American Eclipse and the paper is filled with warnings to get gas and water and food and medications because GRIDLOCK.

Anyway, after the hike we went to dinner at the Bier Stein and then went to Prince Pucklers for ice cream. We were pretty worn out (and dusty!) when we got home but it was a fun day. Mostly, we were happy we could do that hike and feel that we weren't killing ourselves. We've done it before and felt like our lungs were going to burn out of us. But we've been working out a bit and it was also a cooler day so those things worked together.

Sounds like you had a wonderful time hiking ....hope the forest fire is out soon.

You and Nancy have both posted about stocking up.
I love your family hike day thoughts.
All things alpaca I love now. Hi Atom. Hi Calypso. Hi wonderful TINK
I won some yarn from KIM and its tinkerbell

Sounds like a good day! Those forest fires are really scary.