Even though finishing this off was pretty darn boring, I took some time yesterday and just did it. 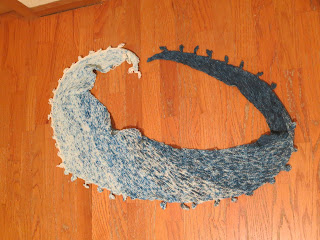 You can see the little cubes (which aren't really little cubes, but whatever, it does add to the scarf I think). I didn't end up using the final hunk of yarn because it was just white and I don't think it added a lot. So that's done.

I also spent time working on the fair isle black and white sweater and also cast on for a new cowl. I'll show you those later.

I didn't take any Calypso pictures yesterday--not sure why. He's doing great--he has gained about 3/4 a pound each day (that's amazing) and all the other girls seem used to him. The other alpacas seem to enjoy my apples but Calypso's sister Georgia got a bit forward with me yesterday (she chest-butted my back). Luckily she's not that big but she is just a bit too familiar.

I slept awful last night--Tim is in Portland for a conference, it was kind of stuffy, Pilot heard a noise, and blah blah blah. We ended up getting up at 5:30 and taking a long walk at sunrise. That was nice. I may need a nap this afternoon.
on August 08, 2017