I don't have any new photos of Calypso today, sorry--I was at the farm and my friend Nicole was visiting with her two kidlets and I didn't get a lot of pictures taken. Sorry about that. 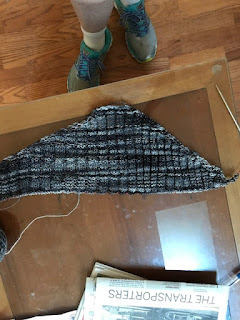 This is One&Done and my big feet. I have five 'sections' done and the pattern recommends seven. It has a fancy lace border that I did not do before but I think I will do on this.
Here is it close up: you can almost see the sparkles: 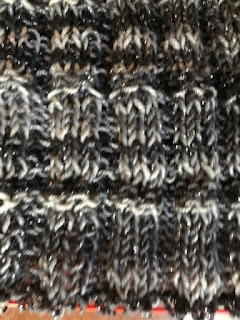 I also have done a lot on the front of the fair isle and also have a few more repeats done of the mock cable.

Things are getting a little nuts here with all the people coming to Oregon for the eclipse on Monday. The news is warning us of horrible traffic issues as well as a run on gas stations and grocery stores--I think the state is expecting several million people here. I filled up my tank yesterday (Tim did too) and we don't really have anywhere we have to go. I'll go out to the farm tomorrow but probably will skip this weekend and then go out after the eclipse on Monday--probably in the afternoon.

At the grocery store today, everyone (and I mean everyone) was talking about how they had to fill their cars up today. It was kind of bizarre. The Portland newspaper published a story about what roads to avoid--and it is basically all roads---all the dark blue ones are the ones you are supposed to avoid. We live in Eugene,which is at the top of the 'Y' on the lower portion of the map. 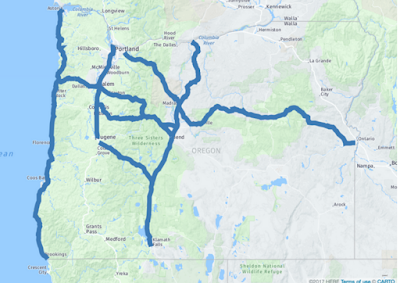 Fireman wishes you all well. Poor EMTs and the like. The increased density of people may make cell calls kooky. That's what our Verizon answer is to our tourist town lousy cell reception. We drop calls DAILY.
Sigh.
Enjoy the eclipse. We are due for clouds....so not likely to be impressive here . we are with the horses and I know they will keep us inside!

I'm glad I don't live in a viewing area! It is going to be crazy. Perfect excuse to stay home and knit!