I had a bunch of little bits and bobs to share with you today but instead I need to talk about Stella. 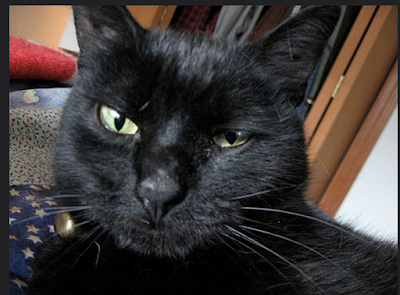 We came home from lunch and a visit from Calypso to find she had crossed to the Rainbow Bridge while we were gone. We think she had a seizure and perhaps a stroke, we knew before we walked in the door that something was wrong---Pilot was barking excessively and something inside the house did not seem right. It probably went very quickly, whatever happened.

I met her when she was a few days old--someone had found her in a ditch, bleeding from every orifice, and taken her to our then-Vet's office. Our vet, Marnee, was carrying her around in her pocket. One eye was barely open, due to her injuries, and they were calling her "Marty" after Marty Feldman at the vet. Marnee had thought she was unadoptable because of her injuries, but after some lengthy discussions we took her home.

Our dog, Shasta, immediately adopted Stella and helped us take care of her during her first several weeks in our house. Shasta played with her a lot---it was a bit disconcerting to see Shasta's big jaws around the head of a little kitten, but they both loved it. Stella was never a purrer or a snuggler, but in her younger days did like being around people and dogs. She wasn't a big meower, she wasn't a normal kitten by any means, but she was our Stella.

She started having seizures when she was about two years old. Our vet at the time, Marnee, wanted to try some alternative treatments because the drugs on the market are not great for long-term use. So we did that for a few years, and it helped somewhat but she was still having a seizure probably every two weeks.  She was stable at that level for a while. We changed vets as Marnee went back to school to learn more about eastern medicine, and then we started working with our wonderful vet Priscilla Gibson. Priscilla worked with us to get her on the lowest dose possible of phenobarbital--she's been on that for maybe 8 years, with having a seizure about twice a year.

Two years ago Stella started 'sunsetting'--pacing most of the night and forgetting where her litter box was. We thought about putting her down, and Priscilla suggested having her sleep at night in a dog crate. We thought she'd hate it, but she adapted very very quickly and it really worked. She sometimes would go in her crate all on her own.

She never seemed to really age, although we could see that she was losing some of her vision and she seemed to get confused pretty easily.  She was a bit more effort than most cats--meds twice a day, crates, gates up in several rooms to protect her from the dogs (who want to play with her, and Stella don't play that) but we were honored to be able to help give her a life that she deserved.

So now our little Stella Luna is gone, and it will be an adjustment for us. I always fed her dinner right after the dogs--tonight I got all confused and almost got her food out. Taking care of her is second nature to us both, and so we need to figure that out. Oh Stella. We love and are sorry you had such a tough life. Mickey and Jasmine and Wendy and Oliver will be meeting you at the bridge.
on August 26, 2017

Blessings to you for having taken such lovely care of Stella. And all of us who love our pets know what holes in our lives they leave when they go. Be nice to yourself for the next few days as they will be full of reminders. I'm going to go now and hug my two kitties. Thanks for sharing your story of Stella.

Oh Kim . Im so sorry for the sad kitty loss. They are so special to us. YOu were so good to care for all her special needs. She was lovely and i love the pocket story

Oh I am so very very sorry to hear about sweet kitty Stella. I am glad she is out of pain and will never be sick again. But it sucks.

Everyone at our house will say a special prayer for Stella and for all of you. Take care.

Also - I sincerely doubt that she thought her life was difficult. She was clearly one happy and loved kitty, and I am certain that she knew.

I know how you feel - when we came back from a long weekend last week, I started to look for Jetsam when he didn't show up to greet up with the other kitties.

I'm so sorry for your loss. Thank you for sharing her story with us. Sending you the best.