I guess I can say I'm in the 'home stretch' of this term: there are two weeks of class left, then a short week (Thanksgiving), then another week of class and then finals. On second thought, I guess five weeks is not really the home stretch--but TG week is a 'work week' and the last week of classes are 'presentations'. The big class turns in their final paper before TG and the small class turns them in during finals week (and there will be incompletes, as some of the students in the small class cannot get going on their thesis prospectuses).

Then almost a month off. I've spent some time this week (as I only had 66 pages of grading) planning out my new class for next term. I've got the cases decided on and the lectures plotted out. Now I need to create assignments for the cases as well as discussion questions but I am on top of it. So that's good. I've got another new class Spring term and I'll do some reading for that during Winter break.

On the knitting front, I've turned the heel on Liab. This is the back--it has cables that wrap around the back to the front: 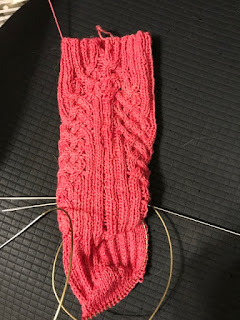 This is the front. You can kind of see the cables coming around on the left hand side. 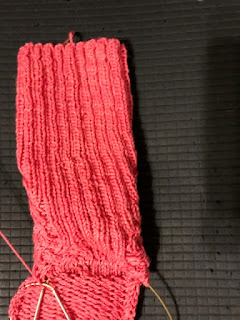 I read "The Rooster Bar" over the weekend (John Grisham) and while it's not Shakespeare, it was an interesting story with some deeply flawed characters addressing some important issues.

Oh---my last plan (knitting plan) is to make two baby hats. I'm ditching the bonnets because they look sloppy. Instead I'm going to knit two Tiny Lumberjack Hats for the twin girls. I have washable yarn in both light green and light purple so one will be mainly light green with a white/light purple stripe and the other will be the opposite. I think it will be cute (and fast) (and fun). We'll see, won't we?
on November 02, 2017

Okay Kim those tiny Lumberjack hats are to die for.