Have you ever heard of a 'strong heel'? Apparently Norse's pattern includes a strong heel. What that means is that instead of doing a heel flap and gussets, the whole sock just gets a bit bigger around the heel and instep area and then a little heel turn happens. So basically, Norse went from 80 stitches to 104 stitches and now I'm dong the heel turn and it will end up at 66 stitches for the foot (which should fit fine).

Here is what it looks like on the side: 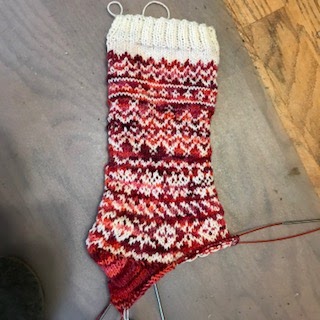 And then when you put it on, it looks like this: 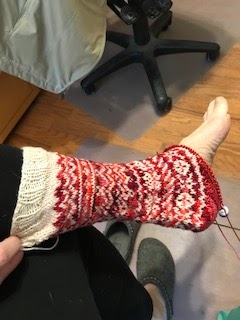 It is hard to photograph because I'm trying to avoid exposing you to my unattractive bunion.

So anyway--when I do another one (which I will), I'll start with probably a few fewer stitches because it is a bit loosey goosey down around the ankle but hopefully this will all come together.

Here is what I don't understand: I've really struggled with fair isle but I have to say, even with my very thick Judgy Glasses on, these looks really good and I'm not sure why. Maybe the changes in the colors in the red Koigu kind of erase some of the wonkiness that happens with fair isle? Maybe I'm improved in my two color knitting with two hands? MAYBE IT IS THE MAGIC OF KOIGU? I'm not sure. I just know I really love working on these socks and love how they look.

I've put a book of Fair Isle motifs on my Amazon Christmas list (if anyone is looking for anything to give me for Christma) because then I could basically just re-create these socks with all kinds of different patterns.

I was a bit under the weather Thursday and Friday--I had a long-ish committee meeting on Thursday in the morning, but left after that and also cancelled commitments (meetings I wasn't leading) on Friday. I think what happens is that if I take any type of delayed-release medication, I just can't sleep. So while some of my symptoms may have been relieved, I was exhausted and achey and just couldn't do anything.

Except knit on a sock. Which is not bad, is it?

Im so sorry you were sick. Colds are a pain in the neck.
I LOVE the sock. I have never heard of not doing a heel flap. I want to know if I should try this!!!! Let me know as you go along please.

Sock knitting is ALWAYS good. But, it helps even more if you FEEL good too. Hope you are feeling better soon.

And, it's apparently Twin Cold Season. . .

I'm totally intrigued by this heel method and I think the colors look absolutely fabulous. I'm liking this sock, a lot. I'm sorry about the cold. The exhausted and achey thing is the worst. I wish I had a cold to blame for it.