Yes I'm a day late, but happy Solstice anyway. I was in another insomniac-daze yesterday and had nothing to really say. A bit better today, so Happy Solstice!  I went to the grocery store yesterday and they had crab! Crab season is still not officially open for commercial fishers in Oregon, but apparently it is open in Washington, so I guess the crabs were imported. They were delicious! 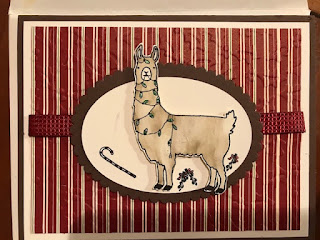 Isn't this a cute card? It is two-dimensional and hand made. Carol, one of the checkers at the grocery store I go to all the time, made it for me! I guess that means that I talk about Calypso a lot. Anyway, she came running up to me in the aisle yesterday, so excited to give it to me. She said "I know it is a llama (!!!!) but I wanted to make it for you anyway."

I was really touched--I got all teary at the store. It was so thoughtful. I'm going to keep it forever, and maybe make an ornament for the tree with it. 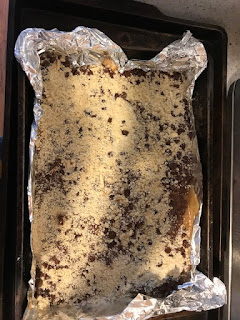 Baking has commenced. This is toffee. It uses two cups of butter and is yummy, but given it has four ingredients (butter, chocolate, nuts, sugar) what is not to like? I also made those brownie cookies that are supposed to crack but they did not crack but are still good. Today: almond crescents. 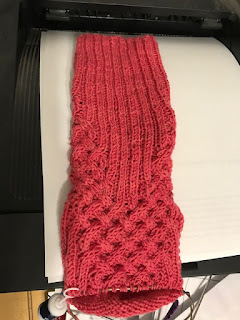 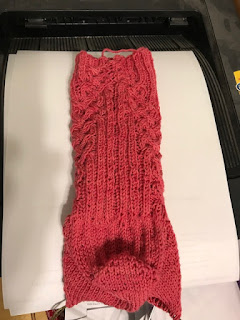 I was hoping to finish the Liab sock yesterday but it was not to be. I have about half a foot (human foot, not measurement foot) left so it will be done soon. I need to visit my knitting priority list and see what will come next! Probably the sweater.

What a sweet lady .....that llama/alpaca card is so cute!!! You must have been very surprised.

I think we ARE ready, but then our Christmas celebration is pretty low-key.

Oh a grocery store buddy!!! With a sweet sweet card.
I finished my gloves while we watched the Family Stone today. I finished Kim! I am not sure what's coming next. I m hoping for yarn for Christmas so I only need something to keep my busy on Christmas eve . we arehaving a rather large party tomorrow so no knitting. I can always work on my log cabin on EVE as we watch our traditional Muppet Christmas Carol. Im hoping for a little bit of snow ToO!