This cowl is not as purple as it looks here: 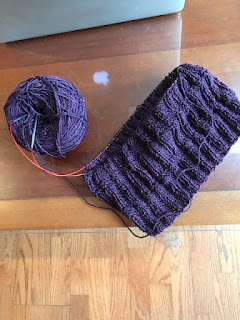 It is really more browny-purple than purple purple, as shown here.

But regardless, this is the Silver Storm cowl by Casapinka and it is somewhat similar to 'One and Done' except it is a cowl. I haven't dropped the stitches yet, but there will be dropped stitches. And it isn't silver, but it does have silver thread in it! I think this might be STR with silver yarn in it.

If you know how to take photos of yarn with silver thread let me know, please.

Not much knitting happening--last week was the last week of classes and the upcoming week is one of grading and meetings. I did the wise thing of assigning the 'big' paper to be due before Thanksgiving, and during the last week the students gave presentations where they graded themselves (2/3 of the grade was the grade from the rest of the class). (FYI, they're easy graders). So all I have are the honors prospectuses (prospecti?) from the other class, and that class is pass/no credit, so I'm pretty much done.

At the end of last week I also dove into a "Revise and Resubmit" and got that done. I had a boring faculty meeting to attend but I spent the whole meeting reformatting references, so that's a good thing. So that's a big thing pretty much wrapped up as well.

Yesterday (Saturday) we had our ad major 'extravaganza' where students present their work around a central idea. It went well! We also got our tree yesterday morning, although it is sitting out on the patio right now. 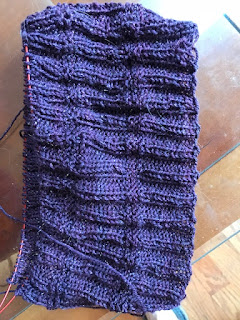 Public Broadcasting is airing "Eight Days a Week"--Ron Howard's film about the Beatle's touring years, and we watched it last night. It was good. You should watch it if it is airing where you live.

Ron Howard is sort of amazing. Briton and I discuss often how he never makes the same kind of movie twice.