I had planned a big 'catch up' post for yesterday but then we made a last minute decision to go see the house-in-progress: the rain that had been predicted seemed less dire and we decided we'd rather have a day at home today than Saturday---anyway, blah blah blah, we went over to the coast to see the house. The outside and some of the inside is framed in, and the house is covered and the shingles are there, ready for the roofers. 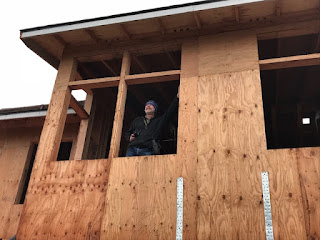 The stairs aren't in yet, but Tim climbed up to the top floor to check out the view and the framing of the upstairs (where most of the living space will be). 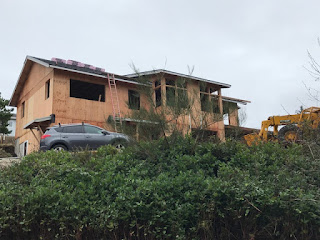 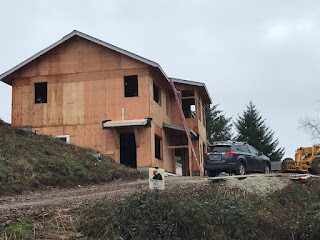 The side of the house, with two doors--the closest one to the downstairs apartment, and the 'front' door under the awning to the left of the car.

So all is well with the house, although it seems like construction will slow down a bit now.

A few bits and bobs:

I LOVE your house progress photos. How incredibly exciting for you two!!!! Keep them coming. I love all blue yarns so I like your Starry night very much

That bottom left yarn is so, so pretty!

Your house is coming along nicely. Will you rent out the bottom apartment, or is that for guests?

The bottom apartment is for guests (and office!).

Wow, don't laugh but it reminds me of a Richard Scary book I loved as a kid that showed the builders making a house. So cool!

I love how your knitting is matching your blog background :)