Basically, that's most days in the winter here in the Northwest.  Rain rain rain is in the forecast--plus the temperatures are moderating (it was in the 60s here on Wednesday!!!) so there will be snow in the mountains and that's a good thing.

Yesterday I spent most of the day catching up on things that had fallen off the radar during the busy earlier part of the week--prepping for class next week, working on a paper, writing two little proposals for little things at school, re-scheduling stuff for the visit from the mudded-in candidate: I got a lot of things checked off the list.

I also finished off the Silver Storm cowl. These photos are pre-blocking: 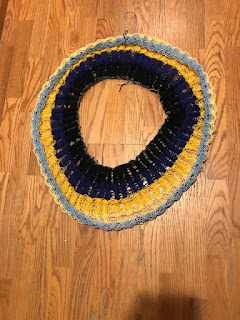 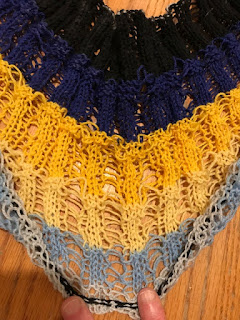 You can see the six colors pretty well in the lower photo--from the top is black, navy, dark gold, light gold, light blue, grey. After I blocked it, it is about 9 feet around, and I think this will be a very wearable cowl.

Kathy is browsing for new projects as am I. I have two I'm thinking about.  I have some yarn in the stash for the Royal Yacht Shawl and so that's a not totally mindless project. I also am thinking of using some sock yarn for the Gravity Shawl although I don't have enough yarn for it (only one skein, which is about 400 yards and the shawl calls for almost double that) but I could do a shorter one, which I'd like better since it is a smaller project. And I found this pattern for Ridge Fingerless Mitts which looks like a good way to use up a bunch of leftover yarn.

Saturday afternoon edit: going to make the Pink Topaz Shawl with the yarn I was thinking of using for the Gravity Shawl and will re-think the gravity shawl at a later date.

I have two books going. First is one called "The Panic Virus" about the history of anti-vaccination movements in the US. It is written by someone who is hopefully coming to visit our campus and talk about science communication. The second one is the 'prequel' to His Dark Materials called La Belle Sauvage (there will be three books in this--the series is called The Book of Dust. If you've read His Dark Materials you'll remember 'dust' as a central focus of power in those books). Anyway, I haven't read HDM for a long time and the book refers to many characters in a way that I can't really recall them (except for Lyra of course) but that's fine.

Dr. Pat came to visit the new animals at the farm yesterday and Ann sent me an update. This little guy is 65 pounds and will probably level off for a bit--he's using his energy to stay warm and grow his fleece. After he is sheared in April he'll probably have another growth spurt. He's at 65 pounds--the vet says anything that is 60 or over is right where he should be. Our friend Cindy took this picture: 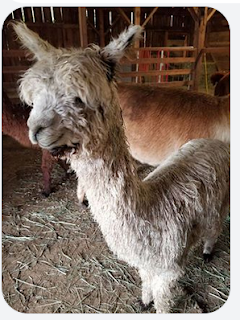 And how adorable is that? He'll be six months old at the end of the month.

All those shawls are gorgeous, but they all look challenging to me.

I admire the way people in the NW deal with rain. Snow is much easier, I think.

I saw the cover for The Book of Dust somewhere. Lemme know what you think, especially since you too haven't read the other books in a while.

Your cowl went fast and fabulous! I'm glad it's so wearable. That's the best to being fun to knit up!