The last two days I've been slammed. I hosted a candidate for a professor job, which involves being on call from 7:30 til 5:30 to make sure the candidate is where she needs to be, where the people who are supposed to meet with her are where they should be, whether equipment is working, etcetera. We have a great staff person who helps out with this, and last week she broke her arm and dislocated her hand (ouch) so I was all on my own.  This is pretty much not a problem for me, as long as nothing else really gets in the way. But--stuff got in the way. ON Tuesday, we got a call from the second candidate saying she was stuck in Santa Barbara and wouldn't be able to get here for her interview. So we had to start moving around everything (again, no support to help me do it). Yesterday I had to be in a very contentious 2.5 hour meeting for admissions. It's basically been two insane days and I'm happy to be here updating you on my out of work life.

Which is basically, I've been doing nothing. Except for this: 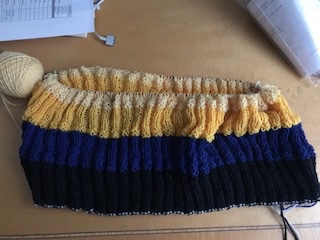 It's the Silver Storm cowl with the yarns from the "Starry Night" set I bought from Loopy Ewe a while ago. I'm making the color blocks narrower and narrower (I have four colors so far---have two more to go). I think this will end up being very pretty.

And honestly, that's all I have right now. Sorry!

Oh yeah! Those colors are working PERFECTLY together!

Beautiful cowl. Sorry about the best laid plans going awry. Im sure whoeveryou are helping along the way whether they know it or not, is appreciative. Your life matters. Your work counts. Thank you for helping others

Fun and beautiful colors in your cowl! Glad it is almost the weekend - my week has been frustrating, but I'm planning on/counting on the weekend being wonderful!