I finished the Gravity Shawl yesterday and did a quick block (water bath, no pinning) and it might be OK. It might need a steam block around the edging. You tell me. 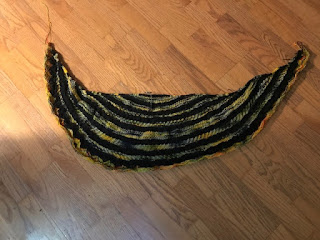 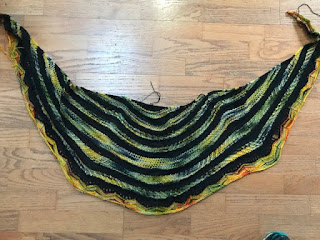 I will do the steam block--the edging is quite a bit brighter and I think needs a little extra oomph to stand out.

I have a lot of yarn left from this, so I might do a stranded sock pattern like Spira (although I keep wondering whether I like Spira because it is so cheerful. I need more white sock yarn in the stash).

Yesterday was Tom's Celebration of Life. I was so completely scrambled afterwards. I know I don't do well with death events, so there's that. I just feel helpless. I also keep waiting for that feeling of peace and --I don't know, not closure exactly, just the feeling that I can stop holding my breath. But I didn't feel that (and I do realize this paragraph is all about me and my feelings and that's just WRONG on some level but yeah). I felt just completely wrung out at the end of it. Maybe because it was long--over 2 hours. Maybe because there was a lot of beautiful music and the singer in the band that played--a band that Tom played for--was a complete mess. Maybe it was seeing his three beautiful grown up sons and being so sad that their children wouldn't know Tom. It was just really, really hard.

It was pretty rainy and dark this weekend, and so I spent a lot of time knitting and reading. I even finished the first sleeve of the fair isle sleeve (pictures later). I also finished several books.

My thoughts are with you at this very difficult time.

The after of the shawl is just so lovely. I say its perfect.
Funerals and services are so hard and so emotional. Big hugs to you. Be good to you. You bring us such joy with your blog and your sharing of your life. We are reminded to treat each day as precious! Hugs

I'm so sorry. (I kind of know what you're feeling now, with the "waiting for peace" - a good friend of mine from church died this weekend. I tell myself, "Once I know when his funeral is planned for I can maybe find some closure" but I don't know if that will happen. Weird things catch you up - I almost cried in one of the local groceries because one of the last times I saw him was randomly running into him there, as I was leaving and he was going in....)

That shawl is really pretty and now I'm off to look up the pattern....

Honestly, I don't think there is any such thing as "closure." You carry grief with you, and you miss the ones who are gone, always. You just find ways of carrying it with less pain. You'll get there. Here if you need me.

Very sorry to read of the loss of your friend. Grief does stay for a long time and then we realise we can accept after all and then there is peace. Sometimes it is a long process and sometimes it is hard even to remember the good times. But in the end you will.

The book, Educated, has had good reviews over here. I may recommend it to my Book Group as my 'personal and lent' pile is huge and slipping another one in as a group read is the only way I will get it to the top of the heap before Christmas 2019!