Friday was a rainy snowy windy day (no accumulation, sadly) and yesterday was just kind of a grey. This gave me lots of time for knitting and reading, and for thinking about what I want to accomplish during the next week.

First, I did finish the sweater and it is now drying on top of the washing machine. 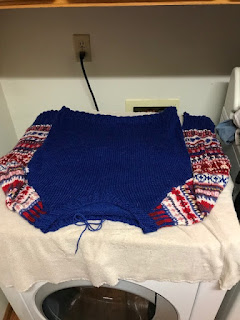 Yes, it is upside down on the washing machine. I tried rotating it so you could see it 'right side up" but honestly, that just looks weird. Anyway, I did mostly knots instead of weaving in (don't judge) and still need to snug up some parts of the raglan sleeve, but this is pretty much done. I also finished knitting on the white seed stitch top and when the blue sweater is dry I'll go ahead and block that (it totally needs blocking as the two front halves are right now not matching at all, but hoping that I can just block that out).

So that means I get to cast on, which you know is one of my favorite things in the world. First, I'm going to straighten up in the yarn room and do some winding up--I'm pretty sure I know which two things I'm going to cast on for first but since I may change my mind I'll save that for another day.

We watched two movies this weekend. Friday night was "I, Tonya." Well, let me just say, I lived in Boston during the whole 'whacking' episode and I was incredibly caught up in it. I was (and still am) on Team Nancy. So, this movie didn't change how I feel about Tonya Harding and it basically just illustrated much of what we have already heard. The one interesting piece of information was that Tonya and Nancy roomed together occasionally? Off to google that. Anyway, there's good acting by Margot Robbie and of course Allison Janney won an academy award, which often goes to a beautiful woman who uglies herself up for a role. Plus, she was good.

We also watched the new iteration of "Murder on the Orient Express" and it is a little bit different from all the previous ones, with some multi-culti casting that kind of works. If you know the story, you can still enjoy the gorgeous and lush scenery, which Kenneth Branagh chews as most actors who play Poirot end up doing.

BOOKS! The unreliable narrator book I read was called "The Wife" and it was written by Alafair Burke. Don't read it. I did read "Alternative Side" by Anna Quindlen and it was good, I would recommend you read it, and it has a very reliable narrator. It is about the community we create in our neighborhood and how that effects how we see the world.

Enjoy your Sunday! The sun is out here so maybe it won't be another wet day!

Your sweater is beautiful. I love those sleeves. Now, when it is dry, you must model it for us.

I never liked Tonya and think she is an opportunist. This story did not need to be told again ....but, I'm happy for Allison Janey. From what I saw, she did a remarkable acting job. The funny thing is .... I think she liked it. LOL