I'm feeling kind of caught up. The paper I was working on with an end-of-May due date is done and I think it is pretty good. One of my classes just did their first group project and that is a 'client' project so it feels good to have that one done. Our client was Eugene's new Bike Share program, and the students ended up doing some good work and the client was really pleased. I always get a little anxious with 'real' clients and this went well.

We had two beautiful summer-like days with a high of about 80 and no humidity. We ate dinner out on the patio and enjoyed it--apparently it is now going to cool off for a few days. It was nice while it lasted!

Shearing last Sunday was another beautiful day--probably only a high of around 60 or so that day, but we were in the barn most of the time. I was there for a little over six hours and honestly, Ann's son Paul has a group of friends who have the whole shearing thing nailed---mostly I helped put the alpacas where they needed to be, the 'younger people' did all the hard work and were very efficient. All the alpacas were pretty helpful, even the boys, and there were only a few spitting incidents. Calypso looks so skinny without his beautiful fleece, but it will grow back.

This weekend we also watched two movies: "All the Money in the World" and "The Post." They were both good. The first one is basically the same story as the TV show 'Trust' (the J. Paul Getty kidnapping) but it was told from a different perspective so that was interesting. "The Post" is about the Pentagon Papers and is a good reminder for the importance of freedom of the press in this day and age.

All my knitting is in the grey family these days, which is not very summery. I've started the front of the black top and it is going well: 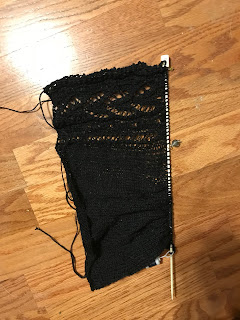 I'm going to put the purple scarf in a 'time out' since it is too 'thinky' for this time of the term--I'll pick it up in the summer.

That's it from here!

I want to see Calypso's fleece. What a fun day you had! Fireman is out cycling and it is so quiet here i can hear a knitting needle drop. I'm happy it is warm enough and the sun is out. We are aching for more of this weather