It has been so nice to separate a bit from j-school---the end of the academic year is always fraught with tensions and this year is the same. It is always kind of a surprise to see what needle will break the camel backs of the faculty and this year's needle involves someone who got enough rope to (hopefully) hang himself. Enough metaphors? Basically, an admin in the jschool who is constantly frustrated that no faculty will pay attention to him told two retiring faculty that they had to vacate their offices by the last day of their contract. This day is the day before graduation and four days before grades are due. And there's not going to be anyone moving into those offices until August. It is just a rude power trip that diminishes the 50+ years of service those two faculty members have provided to the school. What an ass.

On to other things. Will this top ever be done? No I don't think so. 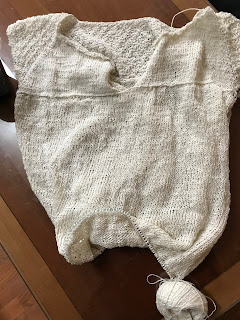 It is hard to get a good measurement on it but I'll just keep knitting til the ball is gone.

It was a fairly relaxing weekend. Tim did a lot of work, we did a lot of weed pulling, I did some knitting, we smoked chickens in the smoker (yum), took long walks with the dogs, and of course visited the house.  The weather was beautiful.

On our walks, I'm picking up bits and bobs of moss: 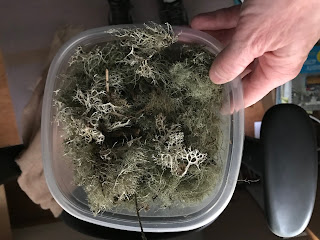 I'd love a smoker. Are they easy? expensive?

End of the semester drama sounds childish. Im so sorryfor the treatment of those long term teachers. They deserve a party.

Academic BS is so annoying and frustrating. My nephew is a prof, so I hear some tales... Actually, my work is filled with similar jerks! They are everywhere - lol. Your sweater is looking great!

I'm sorry you have that kind of work jerk around you. I hope it sorts itself out, or they sort him out, and I mean ... OUT> LOL. Sorry.