It could have gone horribly bad.

Spoiler alert: But it didn't.

I'm talking about my walk with the dogs this morning. Tim is out of town for a few days so as usual, we were up a bit earlier than normal. We left for a walk at about 6:20 and started on a neighborhood walk that is just about four miles long.  I was surprised to see there were quite a few people out walking and running this early, but then we are close to the solstice so the sun comes up around 5:30 am. We were about 20 minutes into the walk, along a section where there are a few large pastures (one neighbor keeps sheep, another keeps llamas--there used to be a person who kept wallabies but they're gone. WALLABIES). So I see coming toward us a guy with a Big Dog, a Known Big Dog that frightens both my dogs (I have no idea what breed it is, but the google suggests it may be a black and white newfie, or maybe a landseer. A Big Dog).

So as I am want to do, I looked for a place to shield my dogs from seeing the Big Dog (this tends to work well, as both dogs have short legs and I can hide behind cars or bushes and generally be OK).  There was a short gravel driveway surrounded by bushes leading down to the llama pasture, so we started down there. And that's when it all went bad.

There were llamas near the gates, and for some reason the dogs went crazy (they've seen the llamas before so I have no idea what happened).. Barking and pulling and pulling and barking--they pulled me down so I fell on my side into the bushes and sticky vine undergrowth. Ouch!  I was having on to the leash for dear life because the gap at the fence was plenty big for both dogs to get in to the pasture, and llamas would be likely to trample the dogs, as crazy as they were acting.

Now, picture this. You are laying on your side, on a downhill slope, with your head facing downhill. You have one armed stretched out holding onto leashes. You cannot let go of the leashes to get up. What would you do?

I kind of lay there for a minute or two (yes, Big Dog was long gone) and rolled my knees forward so I could eventually stand up while still holding the leash. One hand was a bit scratched and my right side is sore but I'm fine. The dogs are fine, the llamas are fine.

It could have been so much worse.

And so there is some knitting too: 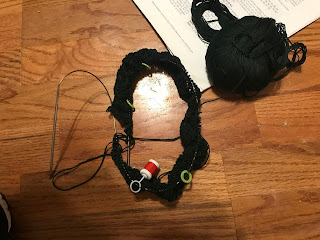 The start of the new top. It's forest green. There's not much to see.

Today, I finish up school stuff and my department is going out for drinks at 5. If I can drag my poor, battered body over there.

Your Rib Story is much more interesting than mine was. Big Dog beats Runaway Shopping Cart every time.

This is not exactly the best way to add adventure to your life! I'm glad you are ok!