It is always a bit challenging for me to transition from spring to summer, with the end of spring being an overscheduled crazy train that suddenly screeches to a stop. This summer has been a bit more challenging since Tim left last Thursday (three days after the end of the term) which (as you know) means I get up really early with the dogs (he is home tonight).  I did do my summer academic 'to do' list which involves some data collection, some finishing up of writing projects, and some prep for next fall. All do-able---I just don't want to do it.

In order to procrastinate, I did count up the number of days til my first obligation at school, which is 9/24, and that is 90 days. (Well, we do have a retreat six days before that, but honestly, if we're getting settled in the coast house, I think I might have to miss it). So that takes a bit of pressure off of me (which is all put on me by ME in the first place).

This week, I've started putting together the survey for a funded study with my friend Kati on bike sharing programs, and I'm waiting for some feedback from her and then some things can be checked off. I also have several manuscript reviews so I'm trying to do one of those every three days or so.

But I have other stuff! Knitting and reading and counted cross stitch! 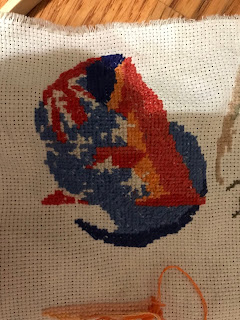 It is the A of the Alphabet!  And it loos pretty good, and took me forever!


Here is a lightened up one. 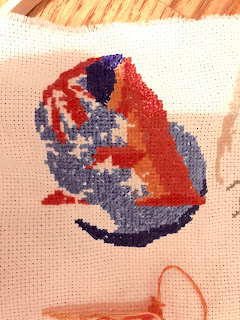 But it is a nice change of pace, so there's that.

Reading: I re-read "The Devil Wears Prada" that I read when it first came out, in the early 2000s, as I needed kind of a light and goofy book. I have seen the movie a few times and I'm astonished at how different the book is from the film!  So much different. It makes sense because you can't have Meryl Streep being as awful as the Miranda Priestly from the book, who is awful up to the end.

I also read "The Perfect Couple" by Elin Hilderbrand. I guess she is 'kind of' chick lit and this one was more 'kind of' a mystery and it is good. It was one of her books set on Nantucket which is always so full of local color. It is even more interesting to me now that we are moving to a 'vacation' spot where we will eventually live full time.

Now I'm reading "The Rebel Prince", a critical look at the British Monarchy.

I think that pretty much catches you up with me. Off to the farm to meet a new friend of Calypso's.

I'm always intrigued by how people cross their cross stitches. I go top-left-to-bottom-right-up-to-top right-to-left bottom. Someone once told me that was "backwards." That person was never given the pleasure of seeing my work again.

Enjoy your summer. I certainly enjoy mine -- although I go back a full month before you do. I'd like to see public school teachers treated more like professors!

Your cross stitch is very cute. It looks like it took concentration!

You will make good use of your summer time-recharge your batteries and enjoy your creative outlets; it's good for you!

Sounds like your summer will be pretty full and busy too. Have fun at the farm.