Are you watching any of the FIFA world cup? It is on pretty early here (the first match starts at 5am--the last at 11am). I've been watching some of the matches---I tend to be up early when Tim is out of town (as he is now) and it is fun to hang out with the dogs and watch soccer and do some knitting.

This is my World Cup knitting, as it is primarily stockinette in the round with a few moments of cabling every so often: 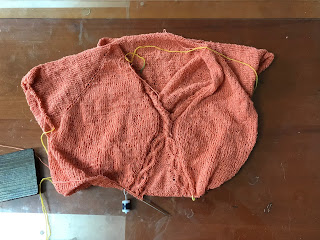 It is going pretty well.

Right now Mexico is playing S. Korea and both announcers are Mexican (I think--they could be Spanish or from another Latin American country--they are so fun to listen to because they love soccer so much.

Mexico just got a goal and the announcer is diong that 'goallllllllll' thing which is pretty fun.

We (the dogs and I) were up early this morning (it was cloudy, which helps them sleep in a bit, but we still were up and about at 6. That's OK, since I think I fell asleep close to 9:30).  We walked a little over 4 miles I would guess--we were out for about 80 minutes. I wanted to show you some of the views from my neighborhood. 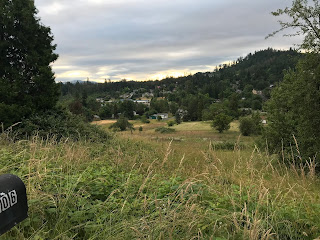 We live at the bottom of this little valley, known as the Laurel Hill Valley. Our walk this morning took us up to the 'top' part of the valley and then down again. North of our little valley is the UO campus--it is about two miles from my house. 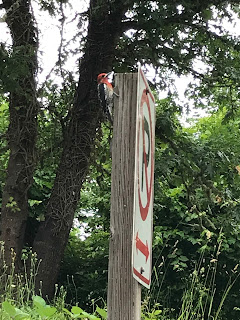 This little woodpecker (I think?) stood still for quite a while and matches the parking sign perfectly! 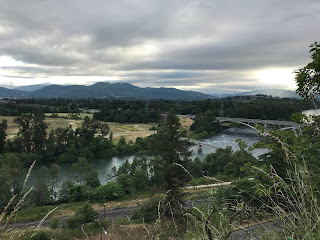 The Willamette River runs through Eugene and then moseys up throughout Oregon to the Ocean. We kayak on this river occasionally--once the summer gets hot, though, it can be pretty shallow and some places are not kayakable since they are so shallow. This is looking south--the big bridge is the Interstate (I5).

The sun is out now so maybe I'll do some gardening. Or maybe I'll just lay on the couch and read. We'll see! Happy Saturday!

I realize I'm inviting myself out, but someday I'm coming to see that area of our country and YOU!!!!!!
Do you worry about ticks? Im kind of obsessed about them..

We have had very few tick problems, Kathy. If we ever take the dogs tromping through fields we check for them, and as they are both very short haired we can see them pretty quickly. I think Tim and I have had ticks once or twice. Please do come out! We can host you at the beach!

Sounds like a wonderful lazy day-the scenery is stunning. Not a soccer fan here but I can appreciate the enjoyment of tv and knitting!!!

Not a soccer fan here (or any sports for that matter)...but I love your early morning walk!