I wasn't feeling this tank top: 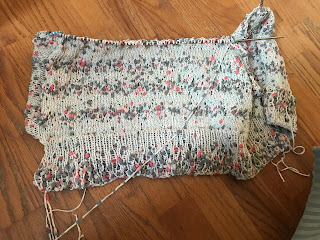 I love the yarn--it is Lang Splash--I love how it feels and I love the little bobblies in it. I didn't love how it was creating horizontal stripes. Apparently a lot of people cut up the yarn so the bobblies all get grouped together but that is too much for me. So I frogged it (well, I started frogging it, Tim finished it off for me) and I will turn it into a snuggly cowl for me (I think Basel on the Rhine) but not for a while.

Yesterday I was thinking "don't I have some dropped stitch scarf somewhere that I'm working on?" and yes, yes I do and did a bit more knitting on it. 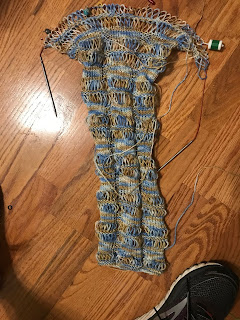 And I want to cast on, right now, for Study Hall. I have the yarn, so I'm good to go!

I finished reading a book called "The Other Mother" by Carol Goodman. She's a good writer, and I've read several other books by her ("The Lake of Dead Languages") and she tends to write about women who end up, for whatever reason, living in a sinister place--but is the sinisterness real or in their minds? This book takes the cake for having not one, not two, but three unreliable narrators.

I started a book called "The Wednesday Sisters" and I think I read it before (it came out in 2008) but I can't tell.

Tonight we're going to the Oregon Bach Festival's all-Mozart program. I know, it is nutty.

We have become sort of addicted to "Midsomer Murders". Have you ever seen it?
on July 09, 2018

DH and I watched all of Midsomer and were so sad when we reached the end!
I really like Study Hall-that is intriguing for a shawl!
Frogs happen.....

WELL YOU MUST Frog if it aint smiling back at yoU!!!! Can't wait to see your cowl. Love the water header

I tried working with bobble yarn and it made me crazy. I bet the music festival was fabulous!! Have a super week. ((hugs)), Teresa :-)

It is nice working with the yarn!

I think that bobble yarn would make me crazy...it's interesting though. Study Hall looks like a fabulous pattern! I bet that was a great concert. I tried Midsomer Murders but couldn't get into it. I'm anxious for the next season of Shetland to be available on Netflix!