A reflection on how I knit

Not really a reflection, I guess, more of a realization--I need in categories.

Sometimes all I'll do is knit on linen tops (I'm looking at you, February-June of this year). Sometimes it will just be sweaters (last year) and now it appears to be shawls and cowls. Which makes sense, seasonally--I want to get them done before it gets cold. Right now I think I have four (maybe five) on the needles. Because I just cast on for this: 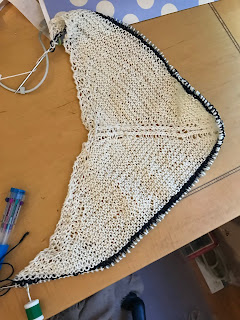 It's Study Hall and I told you I was doing this! I'm using two colors of Elann Lara that were in the stash. Is Elann still around?? I read at one point (I think) they were getting absorbed by Amazon? Hold on, I'm off to Google and will report back.

Huh. They are still around: here's the Elann link-- it looks like they sell primarily bags of yarn. But one bag, enough for a sweater, is less than $40. So that's interesting.


And it does look like many of the same products are also available via Amazon. Amazon seems to sell some mixed colored bags, I didn't poke around the Elann site enough to know if they do that as well.

Anyway---youngsters----Elann used to have really, really good discounts on yarn, and then they started producing their own (or hiring some mill that already does some other brands' yarns to do their's too) and then they went away to just do their own thing. Sad day.

In other news, summer is finally here: 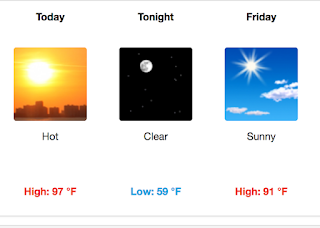 Luckily we don't get humidity here, so there's that. Yesterday it was about 85 or so and it was really delightful in the shade. We opened the windows up at about 9pm. The biggest worry is, of course, fires, now through the rest of the summer.

I finished "Wednesday Sisters" and really had to drag myself through the end. And there's a sequel--Wednesday Daughtes, about three of the daughters of the women who are in the novel. No thank you.

I also started reading the first book in a Mystery series by Elly Griffiths--I read about a later book in the series on someone's blog and when I Amazoned it--well, lookie there, the first book of the series is in my Kindle--I got a deal on it two years ago. So I started it and so far I like it--the main character is a professor/archeologist in Northern England who lives near some type of swamp. I like her.

Yesterday evening we went to Memo's (pronounced Mee-Moe's) for Mexican food. It is a small restaurant with a very family feel, which we like, and they use fresh ingredients and don't bury everything in salt. I had a margarita and I'm not sure what happened but I could SWEAR it had 4x the tequila in it than it should have had. After two sips I was feeling a little giddy and by the end of the dinner (and margarita) I was seeing double! Luckily Tim drove home (he had a beer at home before we went to dinner).  I rarely have an adult beverage, and that could be why is slammed me.

So that's the catch up from here. Stay cool, everyone!

Ahhhhh, Mexican food and margaritas - LOVE!!! I've read all but the last in the Elly Griffiths series and have enjoyed them (I'm in the queue on Overdrive for the latest). Thanks for the heads up on Wednesday Sisters - I'm in the queue for that one too, but might just pass when it comes in. I really like your latest shawl and I'm off to look up that yarn (never heard of it before).

I love your linen and summer knits KIM!!!!

Tequilla must be cheap right now THE SAME THING happened to me last week at THE BOAT HOUSE. It hit me way too hard. I didn' like the feeling ...

I think we all go through phases of knitting-it's good!
The shawl is going to be fun! I used to buy Elann but can't find it anymore...will check out the Amazon bags cuz I want to do a Fair Isle sweater!

Hmmm, perhaps the tequila reacted with a medication you are taking: I rarely drink alcohol for that reason, but I do ❤️ a good Marquita.

I don't drink often either, and it doesn't take much to get me tipsy.
I agree that we all go through phases of knitting, but I think mine are pretty random!