Days of Our Alpacas. or All My Crias. or As the Alpaca Farm Turns.

Yes, there is drama at Aragon Alpacas! I'll tell you all about it. But first: 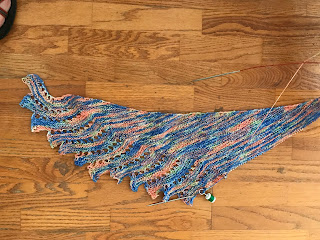 My shawl/scarf with the yarn hand dyed by Cindy is coming along well. There is a ten-row repeat and I have five repeats left. However, of course, I'm at the long part, so it will be slower going. But I feel confident this will get finished soon!

As I might have told you, some of the boys at the farm are gelded (Atom is, as are two of the other boarding boys). When Calypso got weaned, Ann separated the boys into two groups: not gelded and gelded, and  he got put in a boy group with the three gelded boys. It takes a male almost three years to reach sexual maturity. Usually gelded and intact boys get along okay, but sometimes the intact ones can be aggressive to new intact ones. Atom got a bit picked on until he was gelded. So anyway--two groups of boys, the intact ones and the gelded-plus-Calypso. 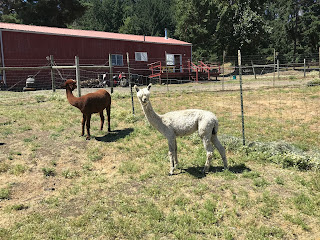 Onyx came to visit for a while from a neighbor farm---he was born a day after Calypso and Carrie re-bred his mom almost immediately (I told you about this once before, I think) and Onyx needed to be weaned cold turkey. So he got put in with the geldings-plus-Calypso.

Then, over in the intact group, some of the boys started picking on the youngest intact male, Strider, who was born a year before Calypso. He hasn't reached maturity yet and sometimes changes at the farm cause some animals to pick on others (the girls do this too).  By picking on I mean excessive spitting. Anyway--then Strider got moved in with the geldings-plus-yearlings (Calypso and Onyx).

But then Calypso's dad, Kokopelli, got sad because he was very bonded to Strider. So now Kokopelli, Strider, the geldings, Calypso and Onyx are in one boys pen. And here's the drama: Strider and Calypso have become friends, and play together, and apparently Kokopelli gets jealous! He got anxious yesterday, and started hassling the boys, and one of the geldings had to settle him down. 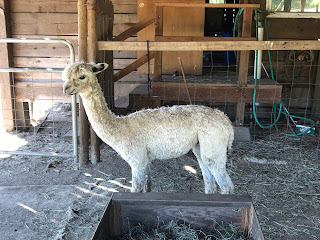 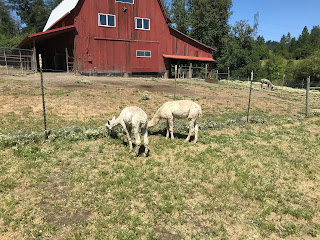 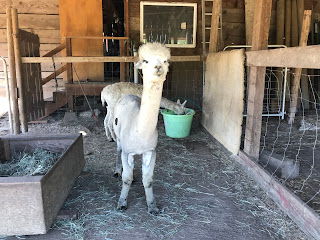 
Tim took pictures too, so I'll have more tomorrow.

Then we went to lunch, and ran some errands, and now staying cool. We did about a four mile walk this morning and the dogs are exhausted!
on July 14, 2018

I always forget that animals' lives are way more dramatic than we even think about!

Your scarf/shawl is looking beautiful.

The shawl is looking very good!
Who says animals get along...?! I'm sorry for the stress on the animals.
We've added the boys' 2 cats to our troop of 6 cats-5 females and one male,
and the two additional boy cats have turned the peace into chaos! Fights, bullying, peeing, yowling. It can be stressful on everyone!!! lol

Love this. I hope The Bomber gave you a full run-down from his point of view.