I spent a bit of time at the farm this morning. I wanted to work on some halter training in preparation for Calypso's birthday party. It's on July 28 (his party), a few days before his birthday (July 30), and if you're in the neighborhood, why don't you come? 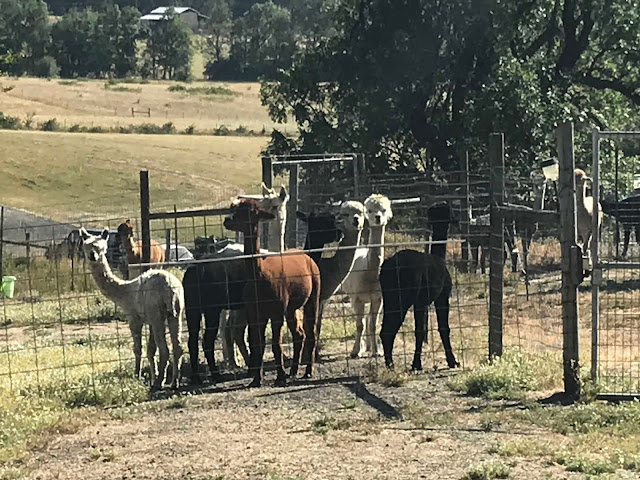 One of the boy herds was all perky when I arrived--not because of my arrival, no, but because the girls were headed to the back field. I took this on zoom on the phone so it is a bit blurry, but that's Calypso on the left and Onyx on the right. Atom is next to Onyx and Strider is next to Atom.

At Calypso's party, we''ll have three of the boys--Onyx, Strider, and Calypso--on halters so kids can hold the leash and (maybe) walk around with them. It is easier to pet the boys if they're haltered. Those three are the smaller alpacas on the farm so they are more kid friendly, and Calypso is already known to be a fan favorite.

So we had a little halter training, which went OK--Onyx and Strider are still hesitant, but Calypso is ok--and we'll do a bit more before the party. Basically, you walk them around with the halter on and then give them treats.

I brought Calypso over to see his mom, Tink, and they gave each other nose sniffs. 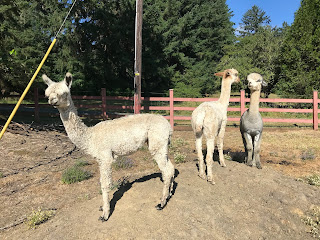 We also trimmed his bangs and weighed Calypso (he weights over 95 pounds! A far cry from this: 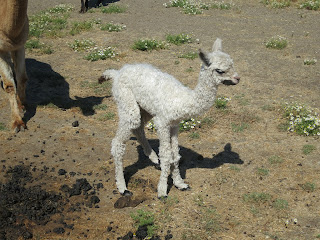 So cute! If I were in the area I'd come for his birthday party!!!

Adorable pic of the boy herd-they don't miss anything, do they!?