In Australiana, D is for 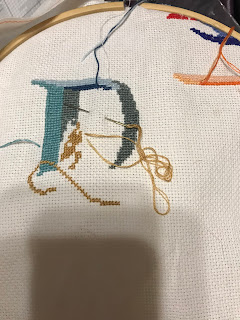 
In other news: vet visit (all is well), working on a fall class, and reading a few books. I read a YA book on Sunday as I am always looking for the next Harry Potter called "Castle in the Mist" by Amy Ephron. I had high hopes because Amy Ephron! And Magic! But basically, the plot is: two kids find a Castle in the Mist and it is very pleasant. There really wasn't anything menacing or dangerous as one would expect.So that's not the next Harry Potter. Then I read a book called "The Showrunner" which was about three women working in production on a television show. I thought I would learn what that would be like but it is really about wanting to get/keep power and the 'oldest' woman was 'washed up' and she was something like 52. It would pass the "Bechdahl Test" but that's about all it had going for it. Now I'm reading "Social Creatures" which is a bit---I don't know---odd? But it is OK.

That D is for Darn good looking letter! Wishing you a great book find. GIven those Thai boys are trapped in a cave, it would be a great time to read or reread Deep Dark Down. THe story of the chilean miners that survived! It was so inspiration

Kathy--just fyi--the author of that book is a former colleague of mine at the UO! Hector Tobar! He taught here for several years and now is teaching at one of the LA schools.

I'm all in favor of jumping around!
I am disappointed by most YA books. They tend to be very formulaic and not that well-written.

Though I know what the term truly means, when I hear "showrunner," I imagine someone going for coffee and snacks.