I read a new-to-me term at Kym's blog today: JOMO or joy of missing out. She talks about how she disconnected from a lot of stuff (FB, Pinterest) and she hasn't committed to Book Bingo or Mystery KALs this summer. And it feels good.

I think I have a little JOMO too--I remember thinking "oooh I should do Book Bingo because the Internet says so" but you know what? I want to read what I want to read when I want to read it, and not worry about whether it checks off a box. And I'm not one of those people who WON"T check off a box if there are boxes to be checked.

There was also a gathering on Wednesday at my department at school where you were supposed to bring your lunch and then play lawn games during the lunch break. I didn't go. I have enough mixed feelings about my job that if I don't HAVE To be there, I don't want to be there. Well, one of my colleagues sent an email thanking the organizers and ending with "if you didn't come, you really missed something good." JOMO right there.

So yes, it is a nice JOMO summer. This really was the week of getting stuff done--I did a lot of yard work yesterday and the front of the house is looking good. I did some work, working on a regression analysis for a paper that actually worked like predicted (this almost never happens) and then Tim and I went to a new Indian place near our house.

This was kind of a new idea (although I think we had a similar experience at an Indian restaurant in  Aukland. You walk in and there is a steam table with about ten different indian foods on it (you are behind a partition). You can then get three, five, or all you can eat items, for different costs--five items were $11. Naan is not included. I had rice, two different chickens, some vegetables, and a samosa. Tim had the spinach daal instead of the samosa. It was delicious and plenty of food and a little different from a buffet but good all the same.

And B is done! B is for Bolga, an Australian crane: 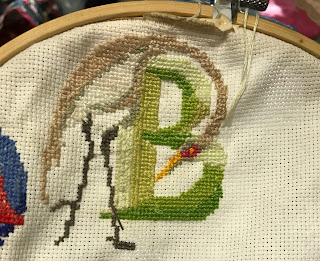 I finished "Death in Shallow Water" and it had a good ending. Now what to read next? I started a book I got for .99 for the Kindle but three chapters in realized I read it several years back. I think it needs to rest for a while until I read it again.

Weekend plans: out to the house to see what is new. This may be the last or second to last visit before we can occupy it. There were some issues last time so hopefully they're fixed.

I just read Kym's post too and LOVE her JOMO idea.

Nice stitching!! HAve a great weekend.

You perfectly expressed my JOMO feelings . . . I, too, am one of those people who WON'T check off a box if there are boxes to be checked. It is absolutely liberating to just say NO from the get-go. :-) I hope you have a wonderful weekend. XO

I'm also a person who doesn't like a 'volunteer' luncheon like that..
As much as I love all sheep-like things for fiber, I don't want to be one when it comes to a book, a knit pattern or a spoken phrase!
Have a good house visit this weekend!

Now I have to go read KYMS JOMO ideas. Im very excited for you to see the houseand have it be so close to moving in. I've so enjoyed seeing it growing from boards to a HOME

I totally love JOMO!
I completely share your feeling about JOMO and work. You can imagine how much pressure there is to do little stuff in a public school. I love teaching and that's what I'm there to do. I don't need to do all the "community building" events that don't really do that.
I can see why people enjoy book bingo, but it's not for me. I want to read what I feel like reading at the moment!