We're having another influx of cool marine air so I'm headed out to pull weeds this morning but first---coffee and a few quick things.

1. Tim took this photo the other night (Monday?) when Venus was very near the moon. It is quite lovely and I thought you'd like to see it: 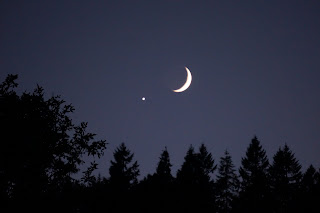 2. I forgot to show you a picture of Atom from yesterday. He *almost* ate grape vines out of my hand (Ann and Mike have, in addition to an alpaca farm, a vineyard and a pretty large vegetable garden. And cats. I have given up that there will be Nigerian  Dwarf Goats there any time soon. 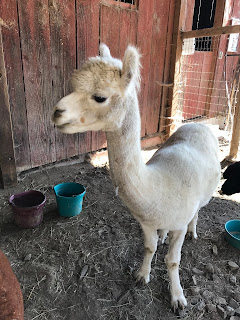 3. Have you read any of the Merry Folger mysteries? They are about a detective who lives on Nantucket Island. I'm reading the first one now--"Death in the Off Season"--and it is pretty good. Lots of good characters and right now,  about 2/3 of the way through, anyone could be the killer. And Merry Folger has an interesting background and I like her. So if you like mysteries, those might be right up your alley--there appear to be five books in the series.

4. Last evening we went to the Lane County Fair. This is a pretty traditional county fair (as opposed to the Oregon Country Fair, which was last weekend, which is a gathering of ex-hippies and people who want to dress up as butterflies and all kinds of things). Anyway, the Lane County Fair--lots of carnival rides and booths, 4H stuff, and crap.

Ten years ago, it really was a big deal, with lots of animals (I'm not sure if they had cows and horses this year, as in  years past, as the giant stage for washed up entertainers was blocking the way). There were only about four farms of sheeps and cows, but there were lots and lots and lots of rabbits and chickens. I guess those are big in 4H now? And there used to be a huge number of county fair entries like bake goods, canning, dried foods (Tim made out big there one year), knitting and quilting, art and photography and my favorite: Tablescapes. But this year: all the above (starting from baked goods) was in one exhibition room, and it wasn't even full. I didn't see any knitting, maybe three quilts---I recall that they changed the rules and I think you have to pay now to enter--before you have to pay but I think you got free entrance to the fair in return, so that seems fair--and now you don't get that. Anyway, it was kind of sad but I think that's all dying out, isn't it?

We did go on two rides--one called "The Tornado" which was not as awful as it sounds--it was basically a globe that you sat in that went around and up and down, and you could spin it around if you wanted to but we didn't want to. And the Bumper Cars. Somehow, a giant block of french fries wasn't appetizing at that point, so we got sandwiches form a local food cart that was there for dinner.

OH! ETA this: one highlight every year is that someone brings a litter of piglets. This year was no different: 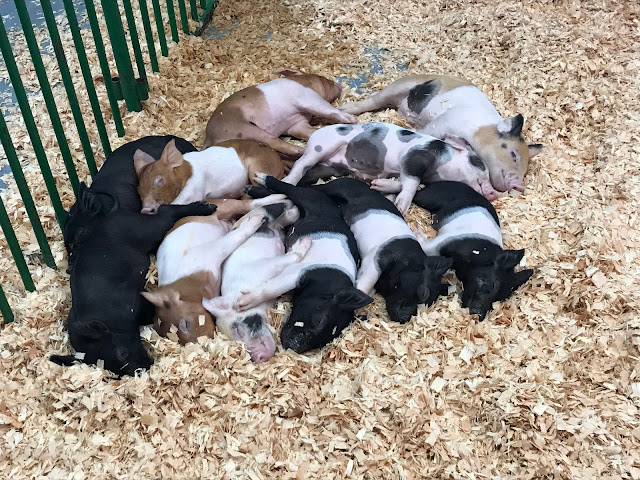 Never fear Mama was close by.


OK off to do weeding! Have a great day!

Our county fair is also tradition and still pretty large. But I worry about it's future. Land in our county is very valuable, and developers want it! One big dairy farm is now a solar farm. I'm all in favor of solar, but it's not a pretty as dairy cows.

That's a great photo of Venus!

Beautiful picture of the moon & Venus. Gorgeous! I have not been to a fair in ages/decades. I wish we had one nearby. But, then, I hate crowds and I don't do rides...thanks for the book suggestion - will check them out.

I have noticed the pretty sliver moon as I head to bed. Oh no. We must keep the farms and 4Hfairs going! !
Ours have not slowed down here in Dairy land...so far

I saw the Moon and Venus together, too, but didn't think to take a photo. The 4-H exhibits have dwindled here, too. I think kids have more opportunities available to them now, so 4-H is not as popular. Chickens and rabbits are quite popular at the fair here, too.

Our genes diverged on carnival rides. None of them for me, thankyouverymuch.

Beautiful pic of the moon! I think the fair entries wax and wane...you need to enter a sweater!