You may uncross your fingers now

What we hoped would work out did work out.

In a nutshell: when we bought the lot on the coast in 2004 (where our house is going now), we had a nice view of the ocean  as there was an empty lot across the street (on a very steep incline) with a few trees but no big deal. Well, you can imagine what happens over 14 years. The trees are bigger and the view is blocked. And the lot is still empty.

The owners of the lot have tried to sell it a couple of times, but it was priced quite high and there were no takers (plus, steep incline--it would be really difficult to build, although it can be done). We even reached out to them once when the lot was not on the market, and they didn't return the agent's call. It has probably been on and off the market two or three times--most recently this past spring.  The for sale sign came down at the start of the summer.

When we were there on Saturday, I noticed the for sale sign lying on the ground at the front of the property (before, it had been stuck in a bucket with sand or something). So Sunday morning I checked the website for the realtors and there it was---at a pretty big price reduction. I called the broker, we put in an offer, we filled out the paperwork, the owners countered yesterday morning, and we agreed to their counter offer so we have the lot! I wire transferred the earnest money over at lunchtime yesterday so we're on our way.

We are feeling so very lucky that we got this (and I'm waiting for a shoe to fall because it was too easy, except when you think we've been thinking about getting this lot for a while). And the lot probably has little value to anyone except us. So yay! The view is going to knock your socks off, once we get the trees down!

In other news:
-the travelling socks are finished (so called because I knit on these in the car to the coast). 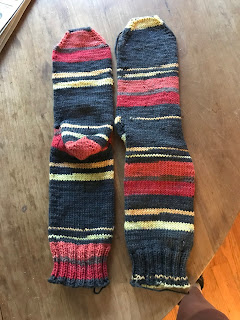 These are for Tim (he likes the mis-match), and they were done with Indulgence 6Ply which is really really nice yarn.  I think it might be discontinued--the Indulgence offered now is 55% merino and 20% silk  while this is 75% merino. There is quite a bit listed on EBay, which is where this came from.
-I'm reading  "The Bankers Wife" which is a mystery/thriller that is so far, so good and THE AUTHORS MOCKS BOOKS WITH UNRELIABLE NARRATORS so that's fun. I put the Adam Dalgleish on hold for a bit--the writing is beautiful but it is heavy.
-We watched an episode of "Collateral" on Netflix and it is a good British mystery series.
-I ordered the carrot cake cupcakes for Calypso's party. I have things to get on Friday but I'm just about set for that.

Stay cool! And thank you for the crossed fingers!

So excited for you about the property! It will mean more and more as the permanency of the move settles in! Great pair of socks!

So happy for you. It's always a wonderful day when your "happy" place gets just a little bit happier!!!

Good luck on the sale. I hope all goes smoothly.

Im beyond thrilled for you. I was so afraid you'd say some monstracity of a home was going to go up and block your view! Hooray. Get my room ready please and my cupcake too

Bravo on buying the lot!! So.. questions.. are you buying it just to improve your view or will you build again? Now I want to see photos!! ((hugs)), Teresa :-)

That is just THE BEST! We always wish we had purchased the property next to ours up north when it was on the market. But we didn't. Oh, well. . . (at least our neighbors are nice). You're so smart to secure your gorgeous view . . . forever! XO

Congratulations for securing an unobstructed view from your new house! Sometimes things just fall into place. I'm glad the stars aligned for your sale.

Congratulations! I'm so happy for you and your husband. Wow, your new place is REALLY coming together.

I love the traveling socks and I love them mismatched on purpose. They are unique and fun.

I will add The Banker's Wife and Collateral to the list. Thank you!

Yay for getting that lot! So fabulous that your view will be secure!!