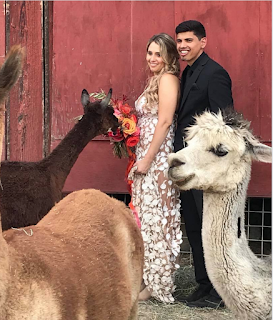 This very cute couple is getting married in about 55 minutes, and the groom surprised the bride by bringing her to the farm to photograph the 'first look'.

This is apparently a THING now that there are photos of the bride and groom before the wedding of the first time the groom sees the bride.

She didn't know she was coming to the farm, and she was surprised. Apparently she loves llamas and alpacas but there's a difference between loving them and wanting them in your wedding pictures.

The photographer didn't seem to get the idea that livestock can't be posed.

At one point we had Calypso on a halter and he was NOT happy. I think there may be some ok photos but he was very stressed (and I think he was making the bride and groom nervous). I did get kicked but he wasn't trying to kick me very hard.

It was a novel experience, I can tell you that, and I'll be interested in seeing if Ann does this again.

Hopefully I'll have a Calypso picture to show you at some point.

Who knew?! I like Tink getting the bouquet! lol

Hmm, it would be fun to see the photos the photographer snapped.

SO FUN. I NEVER in a million would have guessed that was the fun thing you were waiting to tell us about! Hows the kick? They can pack a punch when they are scared, like horses. Keep icing it!! big hugs kathy b

So, Tink was hoping to "catch" the bouquet? He will be getting married next - lol. I didn't know it was now a "thing" to get photos before the wedding. Hope your kick site is ok.

I need to have a talk with The Bomber about kicking etiquette.