It has been a bit busy here, with details about the house to be decided upon, data to be collected, student problems to be solved, and vets to visit.

Pilot went to the vet yesterday. 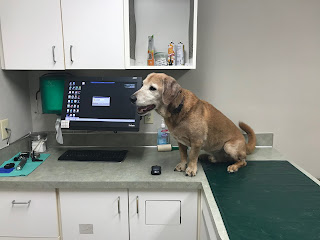 He loves the vet, mostly because of the snacks. Anyway, I had a niggling of a concern that there might be something wrong with him--he has had a small lump on his back and it seems to have grown recently, and I read on the Internet (of course) that fatty lumps (which I thought his was) can turn into cancer. Well, I was wrong, it wasn't a fatty lump but rather a cyst somewhat like a large pimple (or as we call it now, his dormant volcano). So it will either burst or grow big enough to remove, but there is nothing to be concerned about!

I have been gathering these: 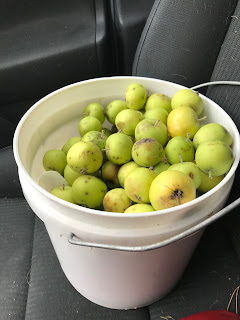 And the alpacas are either thrilled to see me or apathetic (usually a 50/50 split). I had lots of apples today and everyone had plenty.

Even this guy, who has never eaten an apple in front of me: 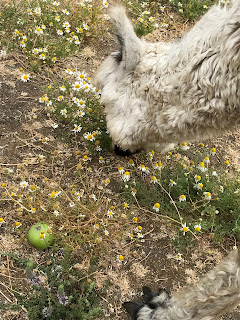 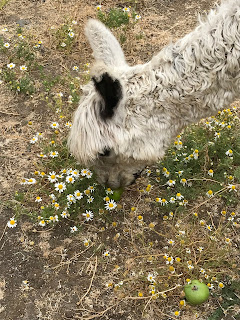 And after apples there was time for a little bath for Georgia, Calypso's sister. 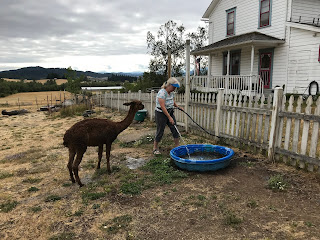 Rupert has always had a fatty lump on top of his head. When someone who doesn't know that pets him for the first time, you can see them feel it and the "Should I say something about this?" look come across their face.

Also, Jessie was extremely susceptible to pimples. Several volcanoes in the years she was with us.

From the photo, it looks like Pilot enjoys visiting the vet - that's a good thing. Pleased to hear the exam result was good news.

"Dormant volcanoes" - LOVE the term! My foxhound has a huge fatty tumor and a few volcanoes. In fact, she has an appointment coming up to get them checked out again.

Glad the volcano isn't serious!!! Yes, the farm is a very happy place!

Great news for Pilot!!! dormant volcano - you crack me up - lol