Casting on and casting on

I love casting on. If you could look in the craft room and see all the project bags lined up, you'd know just how much. I cast on for two new things once Study Hall wrapped up.

First, I'm doing my own twist on a Color Affection by using three gradient skeins from Knit Picks. 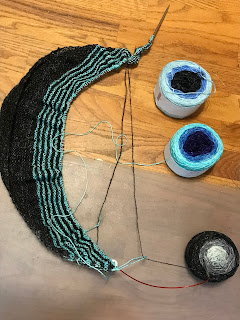 I've got two skeins going right now (the bottom two) and will start the third from the center (as opposed to the outside) so I'll end in a light color. I think it will look good, we'll see.

I also started a pair of mitts called "bead the cable" because I want a pair of black mitts. Every knitter knows you shouldn't knit cables in black but I'm going ahead and doing it. 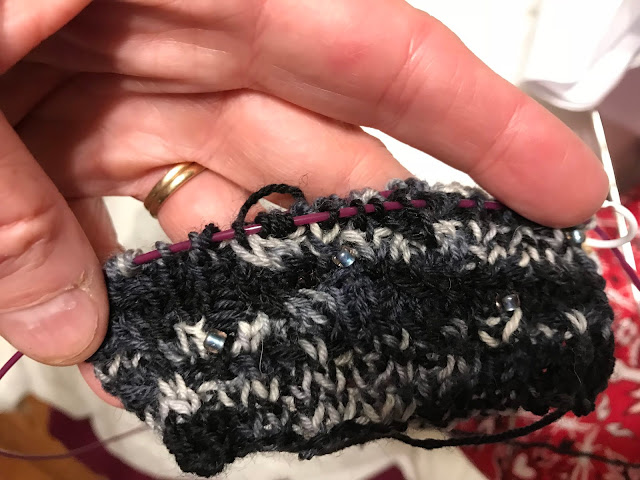 You can't see the cables, really, but you can kind of see the beads.

What else? I finished "The Shakespeare Requirement" and it was fun but probably wouldn't be to you if you aren't an academic. I also finished "The President is Missing", the book co-written by Bill Clinton and James Patterson. If you like books where all the chapters are about four pages long and the end with a cliffhanger (seriously, this book has something like 125 chapters and they're four pages long, on average, on the kindle) then this is a book for you.

I had to kind of convince myself to keep reading the first third but then it picks up and is really interesting (imho).

We watched a new show on Netflix called "Million Pound Meal" which is not, I'm sort of sad to say, a meal made out of gold leaf and truffle oil but a restaurant competition. It combines the "Restaurant Wars" aspect of Top Chef with a bit of a show called "Restaurant Startup" and set in England and it is pretty fun.

We had rain this morning, which we really need, and it feels so good outside!

The shawl is going to be wonderful - I love the pattern you chose.

I'm very interested in how the shawl will grow-nice idea!

I think your gradient Color Affection will be really cool!. Can't wait to see it. (And knitting with black yarn is best with Really Good Lighting.) My favorite part of knitting . . . is planning what I'll cast on when I'm finished with my current project! Happy knitting.

Wow you ARE Bonified crazy Kim. BLack and beads ! Im sure the effect will be stunning. Only YOu would dar to stare that black yarn in the face and carry on!!!

I think your shawl will be stunning! I also am amazed you're doing that complicated knit in black as the last thing I made in black made me crazy! Have a super week. ((hugs)), Teresa :-)