Back to the FO Future 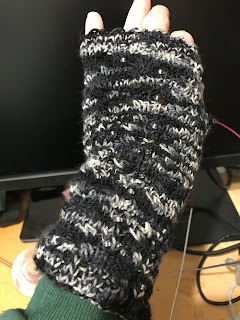 I finished the first one (except for the thumb).  These are really hard to photograph due to the black yarn, but there are cables and there are beads and in person they look really good. Trust me! I am proud that I haven't succumbed to the call of the New Project Siren Song (yet) but it is coming, I'm sure.

It is week 4 and I finally feel like I'm kind of in the new term groove. I can tell mostly because I play some 'brain games' every day and the first two weeks of the term my concentration was shot and my scores dipped down. Now I'm back to improving a little bit every day so that's good.

I had a bit of a fright (another one) on Sunday when a book chapter for a book I'm working on didn't get done (it happens) but I had a bad draft of it and so I worked almost all day yesterday (other than class, and a few student meetings) and banged out a pretty good draft.

We're watching Season 3 of "Billions" and I like it, mostly because I really like the two main actors (Paul Giamatti and Damian Lewis). Most of the financial stuff I can't follow that well, but everyone is evil and I kind of like shows like that. And it isn't violent.

POLL NEWS: it looks like its a tie (I also ran the poll on Rav) and so I think I'm going to do Nova Scotia FIRST and then do the other one once I finish the sanquhar cowl.

Oh I'd love to see the beadwork, but I trust you Kim. They look warm and fun.

I hate it when projects don't photograph so well . . . (I'm talking about you, anything with black yarn!!!). I'm sure they will be perfect in the colder weather -- warm and cozy. :-)

I really like the mitt! It would be a daytime project for me!
When I play Luminosity--after a long no-play time, my scores are really low and then after 2 weeks I hit my stride again! It does prove the fact you have to exercise that gray matter, too!

"New Project Siren Song" LOL I love it. I am familiar with this tune. hahaha.

I may have to give Billions? a go. I like the sinister side of human nature stories as well. Honestly I like violence as well, but not gore so much. I know, I don't always get my taste either.

I am currently deep into the rabbithole known as West Wing.