First up, the deadline socks, named as such because they must be done by Halloween. I cast on Thursday night and cast off the first one last night so I think I'll make it: 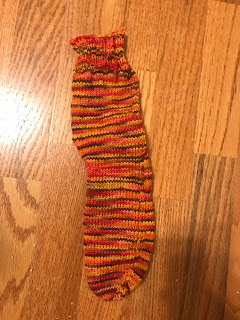 They're fall colored--red and orange and gold and brown and for some inexplicable reason, pink. The label is long gone. So I'm usually not that into Halloween, but I was asked to judge a costume contest at school and so figured I needed to up my game a tiny bit (and considering I have absolutely no game, that won't be hard). So--I bought some ears for Calypso's party that are technically fox ears. I have a fox colored sweater. And I'll have fall socks that are sort of foxy. And I bought a little pin on etsy that says "What the Fox" so I'm set.

Kathy had a quora and I'm tardy:

*. Do you like after thought heels? I have never done an afterthought heel. I might have to try.
* Do you let the weather win? On the coast this weekend it was rainy on Friday, glorious on Saturday, rainy on Sunday. I can deal with that kind of pattern. Generally I'm ok with gloom though.
*Do you plan your television time?  Or do you just turn it on and look for something that interests You?  The only 'live' stuff we watch is football. We record stuff and zip through the commercials.
*  Has a purchase surprised you of late? We bought a steam vac for the house and it works surprisingly well, so there's that!
*Are you holiday knitting?  Yes! I'm working on a project in cross stitch and I also have some yarn on order for a gift for Tim.
*  Did you share any plants this year? Ha no, only if dead ones count.
on October 09, 2018

You're downright foxy ... to put together such a fun Halloween costume! ;-)

That sock is wonderful . Kim we saw a young alpaca jumping and running on a hobby farm the other day. it was so cute! Then we saw some little goats doing the same. They must like the cooler weather upon us. Today is warm, sunny and I'm on the porch, trying not to be a baby about the upcoming cold months. I live here, I need a plan!! :)

Pink is a surprise accent for the yarn colors: love the look of the yarn when it's knit.

Very Fall festive sock yarn! You will make the deadline for sure!

Love your fox costume idea (what the fox!!!). Your socks sound lovely...for some reason I can't see the picture of them. Something with my work computer.....