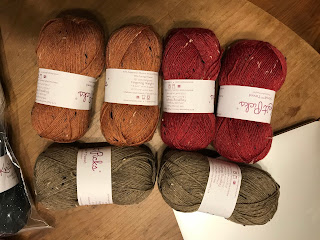 Some fall-y Knit Picks for a fally cowl, I think. Probably fall next fall, I guess. But I like these colors a lot. It may be another fair isle type of thing.

And this will be a cowl that will just be pretty. There are sparkles. 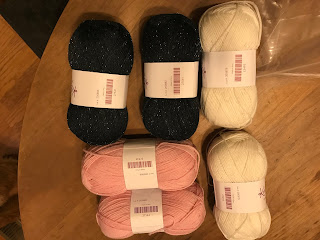 And as much as I say I want to only knit little things, I've cast on for another Sanquhar cowl--this one by Wendy Johnson in really really little yarn. There are 14 charts that are all repeated twice. Most charts have 22 rows. And there are more than 200 stitches on the needle. Luckily it is in the round. 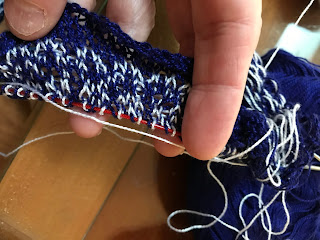 I think my friend Karen is knitting the same colorwork cowl. It will be lovely. I love your fall knitpicks choices.

It does look like lace weight yarn! It will drape in a very lovely way!
Nice to get out the Fall colors to knit with even if you're not seeing a lot outside yet!

Those Fall colors are gorgeous together (and I really like KnitPicks yarn). The cowl is equally gorgeous. I've never knit any of Wendy Johnson's patterns, but I love them all.

I love those fall colors and I've never met a pattern of Wendy's that I didn't like. Your cowl will be gorgeous when it's done.

The tweed yarn will make a fabulous cowl.