Working for the Weekend

My morning walk with the dogs was in a bit of fog during the sunrise (such as it was, given fog). We started in twilight (or the morning equivalent of twilight--is there one?) and it was so nice and quiet (we live in a valley and the interstate is about a mile or so away, so we sometimes hear traffic. In fog and clouds, though, it is muffled).

It was nice, and it seemed like the dogs and I were the only ones in the world (for about five or ten minutes, then we ran into people leaving for week and people coming to build the houses in the neighborhood we walk through and CATS ALL THE CATS.

My mind has been very anxious lately, due to stuff at work and some personal stuff (all is well, please no worries, I'm working on my stuff and it will be fine) and the quiet of the morning was really helpful.

And more quiet is on the way: we're headed out to the coast house and because our schedules will allow it (and we have really, really good wifi) we'll go over Wednesday after work (it is about a 2 hour and 15 minute drive in good weather with no traffic). We'll work from there on Thursday and Friday.  We're so fortunate that we have that option (and that I can 'zoom' into a faculty meeting on Friday afternoon).

But that means I have to have a lot of stuff organized (well, what work to take and what crafts to take) today, because I'll be on campus for most of the day tomorrow. But that's fine. After several trips to coast with cars loaded with stuff, this time we really only have some window shades and a few odds and ends, so there is plenty of room for crafts (I will take some counted cross stitch and knitting, so MULTIPLE CRAFTS).

I may cast on really fast for No Harm No Cowl to do in the car because it looks fairly straightforward. I also will probably take this: 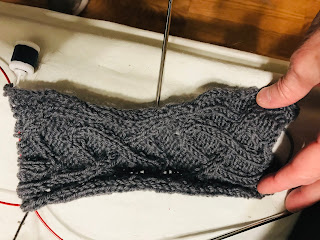 Oops hard to see but it is the start of the Boxed and Cabled sweater which begins with the cable across the back.

And in the pantheon of poorly photographed knitting, here is the first finished mitt: 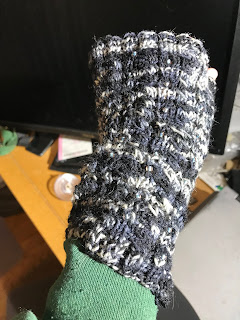 And here is a closeup so Kathy can see the beads (although they aren't showing up well). 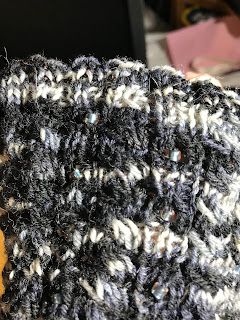 So nice that you can head to the coast mid-week. Boxed and Cabled is just so lovely.

Enjoy the mid-week visit! It will do you good! The planned projects look like meaty ones--nice work on the finishes, too!

Enjoy your time at the coast house. I hope the time way is restorative.

Im glad you are working on anxiety and not letting it get away .. I have had some issue this month too andI I do not know why. Mere suggested I meditate. I ve done 5 minutes of trying for the last 3 days.
Im so glad you are going to the new house.
I LOVE the beaded mitts Thanks!

I'm so glad you're going to be able to get away for a few days. (It's so nice to have that option, isn't it?) Enjoy the change of scenery -- and spend some time relaxing. XO

Hope you're able to get lots of work and even more crafts done at the coast. Both those patterns look like they'd be fun to knit.